It doesn't feel like it's been ten days but then again, that's not surprising as it has been a jam-packed week and a half and I haven't had much time to reflect on it, let alone compose a blog post about all the happenings.

We took the car in to be assessed and were told the problem was not covered by our RACV warranty, and that it would cost in excess of $2000 to fix. On the same day, the Grumpy Old Man had a job interview for a position which requires him to have a car.

We ended up calling his mum and asking her for the money. We weren't at all sure that she would come to the party, not because she couldn't afford to but because she has not been very supportive of the idea of the Grumpy Old Man driving since father-in-law passed away almost four years ago.

She did come to the party though and we got the car fixed, which was cheaper than expected at $1700, and had a new key cut (a worn key was the reason the battery kept draining) at the cost of $140.

We haven't heard back from the company where the Grumpy Old Man had his interview. The next stage of the application process is a physical - the physical is why the Grumpy Old Man didn't get the last position he applied for, so this part is a bit nerve-wracking - assuming he gets that far. We'll see what this week brings.

I took Erik with me to see my counsellor on Thursday. The session went well, and the counsellor is keen to have his tested (IQ testing). I won't see her again for about three weeks, but I look forward to hearing what she thought.

I've been keeping it under my hat for several weeks now that Deakin had gotten back to me about reassessing my application and had said they thought they 'should' be able to offer me a position in their Higher Degree by Research PhD; they had asked if I would be will to wait to start until mid-year. I got straight back to them and said I would be quite willing to wait until mid-year. I had hoped to hear back from them quickly but after a fortnight of waiting I found myself emailing them again to double check that they received my last email. They said they had and were processing my application and would get to me 'in a few weeks' but they couldn't tell me anything more than that.

Then on Thursday I received an email stating my application had been approved. 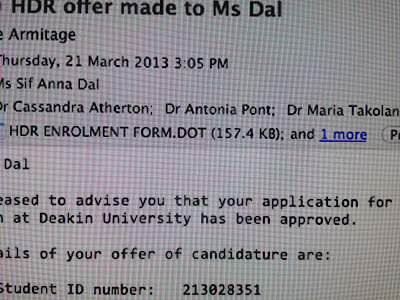 Usually, I'd get right on here and post such news, but to be honest, I was quite shell-shocked. Just three months ago, I was devastated to hear that my application had been denied and then to find out the grounds for denying it were so flawed, but the person who had denied my application was quite sure of himself. Then he resigned but it had been so long since the application process had ended I felt sure they'd make me repeat the entire process and that by then the person who was supporting my application would have moved on to other projects. This process has taken seven months in total.

I had completely prepared myself for more disappointment.

I sent off my acceptance forms by email on Friday. My commencement date is June 3rd, 2013. It's all happening!

Yesterday, we had a full day out as a family.

In the morning we loaded the car with scooters and headed off to Kew Traffic School for an outing with Ari's kindergarten. Bryn even saw a couple of kids from his year group who still have younger siblings at the kinder this year. At first Erik and Lukas were being party poopers because they were so much older than the littlies, but with some other older siblings joining in, they all ended up scooting around. There were sausages and fruit and cordial and it was just nice to get out and do something together. Ari really didn't want to leave in the end!

Afterwards we had a quick lunch at McDonalds in Balwyn (the boys were in heaven, it's a been a few months since they all had Maccas), then headed over to Warrandyte to check out Erik's painting at the Warrandyte Rotary Club Art Show. We didn't realised the Art Show was part of the annual Warrandyte Show and so we ended up driving around for 45 minutes looking for a park. Finally, we decided to park about a kilometre away from the exhibition. Ironically, we probably could have done a little less walking if we'd taken public transport!

My parents met us at the exhibition and we spent almost an hour checking out the 5000 paintings (and wrangling a somewhat overstimulated and overtired Ari).

Erik's art teacher, who had entered his Surrey Dive painting after he brought it to school a couple of weeks ago, had told him she thought he would win first prize. I had spent the last two weeks trying to prepare him for not winning first prize. He was absolutely convinced he would win a commendation though. I tried suggesting he might not even win a commendation, but he wouldn't hear it.

Erik has had a lot of adulation for his art because of his age in relation to his ability. Obviously, as his mother I am extremely proud of him. That said, he won't always be considered a wonder because of his age, and I want him to be able to cope with that. This showing was a great first encounter with disappointment for him. He did not win first prize, nor did he win a commendation. His work is great, but the standard of works in the secondary students gallery at the exhibition was simply amazing! Chances are most the other competitors were 2-4 years older than Erik, but ages were not recorded or used as a yard stick for assessing artistic ability. Erik, who has been used to being a big fish in a small pond, suddenly found himself in a much bigger pond with much bigger fish.

I am proud of how he coped! He took it all in his stride and really looked at what the other students had produced. He took note of the styles and media they employed, the sizes of the canvas and the themes. I think he saw the possibilities he can work towards. It was a great piece of experience for him and it came at just the right time, I think. 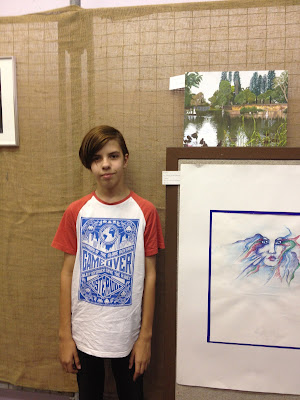 We didn't stay at the show as long as I would have liked. Ari was very restless and quite disruptive, so we ended up leaving before we all had an opportunity to properly look at works. I think my mum will be doing some painting this year, she was very inspired by it all.

Even though Ari ended up having a melt down by the time we got home, I was pretty happy with yesterday and with all we accomplished. Having the car is making such a difference to our lives. Being accepted into the PhD is a dream come true! Now, if Dave gets this job, I think our lives with finally be right back on track!!!

at March 24, 2013
Email ThisBlogThis!Share to TwitterShare to FacebookShare to Pinterest

Happy for your good news, and that you had a wonderful day with family.