Fire, fire! Getting your kids involved in your home's fire plan!

I was recently offered the opportunity to be involved in a Victorian Department of Justice Fire Awareness Campaign!

I jumped at the opportunity because I believe this is an important issue that every family, especially those with children, should seriously consider!

Fires scare me. Burning to death is my greatest fear.

I have one distant cousin who was badly burned while playing in a packing crate -in the snow! - with his friends.

As well as this, my brother and I, and our four year old cousin narrowly avoided dying in a fire when I was eleven. I joke about burning a house down, but the truth of the event was potentially horrific.

Living in metropolitan Melbourne, we often feel safe from fires such as the one Victoria witnessed on Black Saturday two years ago. This is a false sense of security. One of the Country Fire Association (CFA) fire myths states:


Many Victorians live 'on the urban fringe' in this ever sprawling city, and in a couple of weeks, many Victorians will also be taking off for the Easter holidays to make the most of the last warm days of the season.

Having a plan in the event of a fire is the smart move! If you're travelling, this is a good place to start your planning.

Other common myths include:


In our house we had a 'Fire Plan Meeting' this week. We introduced the topic by talking about the fire drills the kids have done at school and kindergarten. I told them we were going to do something like that for our house in case there was ever a fire.

We told them that first and foremost, it is important you have working smoke alarms in your home!

We're all encouraged to change the batteries in our smoke alarms at the end of daylight saving every year - this year, daylight saving ends on April 7. Here is a picture of the Grumpy Old Man testing our alarm - don't you love our spider webs; just keepin' it real, yo! 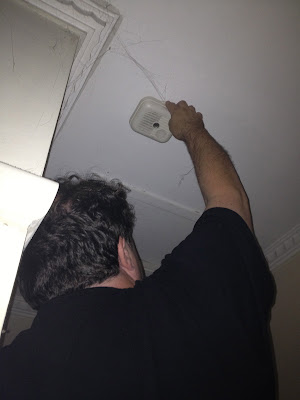 We tripped the alarm and explained to the kids what that ear piercing sound is all about; what it means, and what to do when they hear it.

That particular alarm went off a few weeks ago while I was cooking late at night (there is a reason why I don't cook most of the time) and even though it is positioned directly outside the boys' bedroom, none of them woke to the alarm. It has been observed that children don't necessarily hear alarms in their sleep - so alarms during the night are important to wake adults! It is important to let children hear the alarm when they are awake and make sure they understand what it is for, so that if you wake them during the night, they understand what is going on and can react appropriately.

Next we talked about what to do in the event of a fire.

If you live rurally, or on the outskirts of the city, the CFA have a range of fire ready kits you can fill in to prepare a fire plan.

There are plenty of activities for kids on the CFA site; for example, you can get your kids involved in packing a relocation kit by playing the game Neville Numbat gets dressed for safety. Getting kids involved gives them a sense of confidence and understanding which will pay dividends if you need them to pack up and get in the car when they'd rather just play at home on fire risk days.

For older kids - like my 11 and 13 year olds who tell me they're basically adults now - there are interactive videos, activities, and information about paying attention to fire risk ratings, ember attacks and radiant here.

If, like us, you live in the metropolitan area, you can got to the Metropolitan Fire Brigade site and check out their home safety tips.

With our kids, we drew up a rudimentary home and garden plan. The CFA site has an awesome interactive game for kids which can help them design a plan of their own home and garden complete with doors, windows, fire extinguisher, fire alarms and fire blanket for the stove here! Our kids loved designing our house in this game! 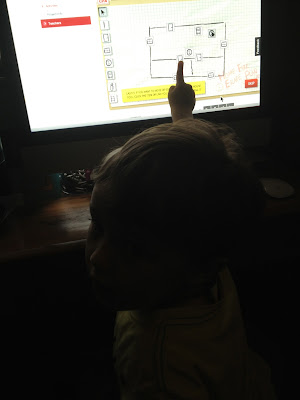 As you can see, it's very basic. With kids, the K.I.S.S. (keep it simple, smarty) really does apply. You don't want to bore the kids, but you want them to get the point.

We told showed them how to feel a closed door to see if it is hot, and how that might mean there is fire behind the door and not to open it unless there is no other way out. We explained that it might be dark and hard to breathe, but they just have to keep moving until they get outside and to the meeting place.

We told them not to try and grab any of their favourite stuff or stuff they think they need to 'save'. The only thing they need to save is themselves - they are more important than any other 'thing' in our house, everything else can be replaced.

Then we did a drill because kids often need to 'do' to understand.

Bryn crawling to the front door 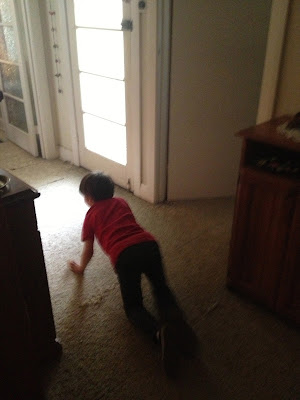 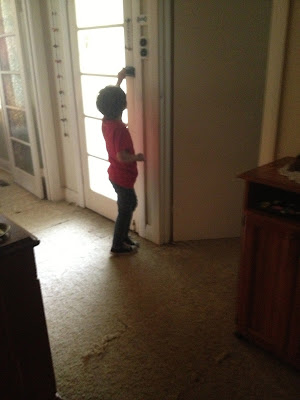 Lukas and Ari crawling to the back door and Lukas checking for heat before opening it. 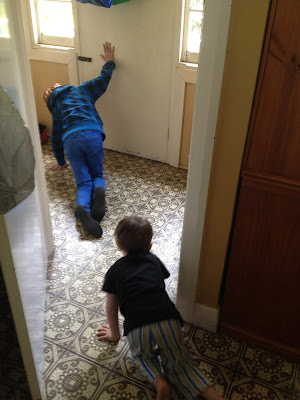 Everyone gathered at the meeting place. Erik in his pyjamas, and Ari without shoes because when a fire happens you might not have time to find clothes and shoes, you just get out as fast as you can! 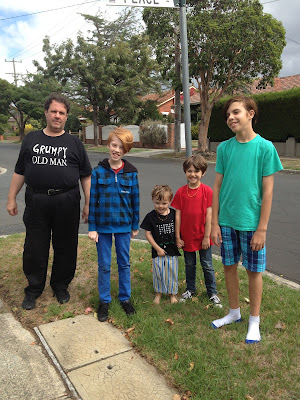 They all look very happy, don't they?

A safe family is a happy family! So, get your fire plan happening! Go to the Country Fire Association site, plan and prepare, introduce your kids to Captain Koala and Friends, get your older kids involved as well.

The Australian Emergency number is: 000

at April 03, 2013
Email ThisBlogThis!Share to TwitterShare to FacebookShare to Pinterest