Talent vs Skill or Talent AND skill?

Lukas received his high school enrolment forms today, which is pretty clever considering we haven't even lodged his preferences yet. Guess they want to 'lock him in' before the influx of applications - I'm quite happy to do that!

This time last year we were still just hoping Erik would get into this high school and we'd already invested some time and money in showing his 'special interest' in art. Things are different for Lukas because Erik is already at the school, but also because Lukas hasn't really shown a special interest or talent to the same degree as Erik. He is interested in music, but doesn't play an instrument. He is interested in robotics but hasn't showed a special talent for it, as such.

He's started on his 'Local Landscapes' painting and is going to paint using this photo from our Brighton Beach trip. 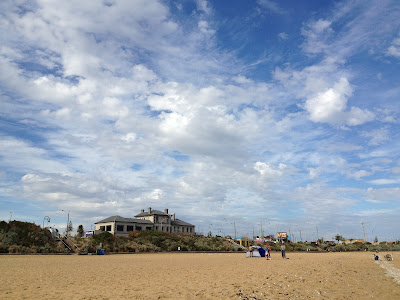 I took some photos of him starting the sketching stage last weekend. 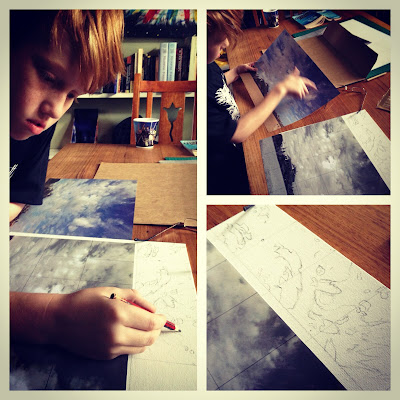 It made me nervous when Lukas said he wanted to do Local Landscapes. Erik did it last year to much acclaim. Lukas hasn't really shown as much interest in drawing or painting as Erik. When the school had drawing incursions with Joffa, Lukas has shown he has some drawing ability - he is certainly not without his own level of talent, but I guess we've always viewed Erik as the one who draws and paints.

Last weekend however, Lukas did show us that he has some abilities Erik doesn't possess. Lukas can focus for much longer and is more able to follow direction. He has a greater attention to detail, as well. I guess what I'm saying is what he may lack in raw talent compared to Erik, he makes up for his willingness to learn skill.

Skill is often under-appreciated in comparison to talent. People love natural talent. Self-taught people are admired. However, talent can only take any person so far, and at some point talent must be scaffolded by skill.

The Grumpy Old Man has a tendency to say that he has more skill than talent - I'm not sure I agree, I think he under-estimates his talent - he certainly is skilled. These skills are what he is teaching the boys. He's teaching them how to grid up a reference and use the grid to ensure proportion. Gridding has fallen out of favour in modern times - because people have a greater appreciation for natural talent and a natural eye for proportion - however, having skills can help train the eye, I think, and knowing 'the rules' is always the first step to intuiting when to 'break the rules'.

I'm excited to see what Lukas can produce and how his work will turn out!

at April 23, 2013
Email ThisBlogThis!Share to TwitterShare to FacebookShare to Pinterest