Doing a doctorate is about learning new stuff... 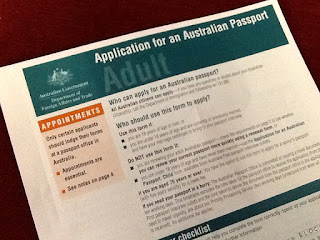 I picked up one of these from the Post Office today. It's the first step. Once I have this passport sorted, I need to get onto getting my Icelandic passport as well - because that'll doubtlessly take a fair bit longer to organise.

I probably won't need them for another year, but I will definitely need them.

You see, I had my first meeting with my principal supervisor yesterday. I wasn't nervous about it because we have been chatting on email for about nine months and she is only ever encouraging and enthusiastic.

Before meeting her I had a seminar to attend in the morning about using EndNote. I've heard so many things about this referencing database program; some people swear by it and say it completely changed their research experience for the better. Others say it was too confusing and they ended up ditching it for their own homemade system.

It looks pretty good to me, but I think its efficacy also relies on consistently using it, editing your libraries and backing up. Consistency is not one of my strong suits - but hey, doing a doctorate is all about learning new stuff!

I have really enjoyed doing the induction seminars and have met a few lovely people along the way. One of the people I met before my supervisor meeting was another PhD student who also has the same supervisor as me - and she only had positive things to say about 'our supervisor'.

So, to the meeting.

In person my supervisor is much more decisively spoken than in her emails. I don't know what I was expecting, I guess from her emails she seemed a bit more 'girly' and 'soft' - seems ridiculous to say that, but you know how you get a picture in your head of how people are from their written words?

So, instead, she is absolutely about the business of getting a thesis done. I was highly impressed! She told me straight off that:

- She likes to work to deadlines and while she doesn't lose her shit if you miss a deadline, she also doesn't let it slide.

- She aims for her students to submit in 2.5 years (we have 4 years and are told to aim for 3 years because most students take about 3.5 years), so she believes in just ploughing through the work.

- She wants me to get the hard theory down first, referencing high end journals, and only then can we start to look at articles on the net etc. (no less than I would expect, of course).

- She aims for her students to published in high end journals (plural).

- She aims for her students to present at an international conference!

She said by the time I undertake colloquia (in 12 months time), I should have a chapter worth presenting at an international conference!

Presenting a paper doesn't worry me so much - as she said, I'll be the world's leading expert on my topic - but travelling overseas to present to complete strangers, well, that scares the crap out of me!

I asked (probably very naively) if students travel alone to these conferences. She said I could take someone with me if I wanted to - but the University won't pay their way. Okay. I have travelled by myself before. I travelled from Norway to Australia on my own when I was 18 and then I travelled to Japan on my own when I was 22, but each time I had someone I knew and trusted meeting me at the other end. This time it will be just me and a bunch of strangers.

Doing a doctorate is all about learning new stuff, hey?

at June 14, 2013
Email ThisBlogThis!Share to TwitterShare to FacebookShare to Pinterest

I went to the UK for three weeks recently, mostly on my own. Stayed with an old friend for a few nights, and the last few nights I met up with other runners from the same charity as me, who I'd exchanged a few emails with but never met.

I found it slightly nervewracking at times but quite exciting - and after travelling with children, pretty easy!