Endings at the end of the week...

A couple of weeks ago I posted about our 'den of creativity' and the various projects we were all getting on with at the moment. Today I will update on a couple of those and another - not exactly creative, but certainly a - project which has reached a conclusion of sorts...

On Wednesday Lukas finally handed in his 'Local Landscapes' painting. He was originally supposed to hand it in on Monday, and then the teacher gave stragglers an extra day, but in the end, we didn't meet either of those deadlines and he finally handed the painting in on Wednesday afternoon after having the day off school to complete it.

It turned out very well, I think. 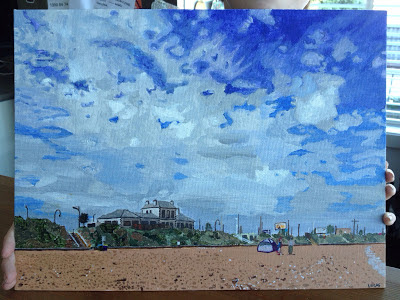 The Grumpy Old Man and I are of the opinion Lukas didn't undertake this project because he has a deep abiding love of art or painting, in fact, both of us will be very surprised if he ever picks up a paint brush again. We think he probably decided to do this project just to say, 'I can paint, too, for the record, I just choose not to.' Whatever his reasoning, he certainly has some ability. We were both delighted to see him develop his own style which is quite distinct from Erik's, as well. On Sunday we will be attending the National Gallery of Victoria exhibition launch for the Local Landscapes Project, so expect to see an update from that event in the next few days, as well!

I also submitted my photo, which will be on exhibition (and for sale) at the Abbottsford Lentil As Anything from Friday 5th of July. 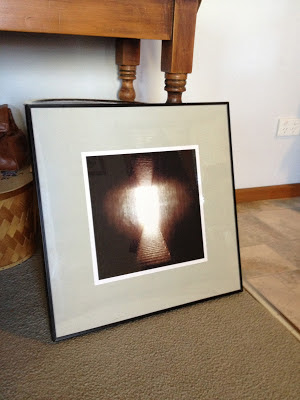 With another project needing to be started, I knew I had to finish of the scarf-shawl I had been working on for a couple of months (with a few weeks break in the middle to move house). It turned out just as I had hoped, and with morning temps dropping down to 0 degrees (!) this last week, I didn't finish a moment too soon! 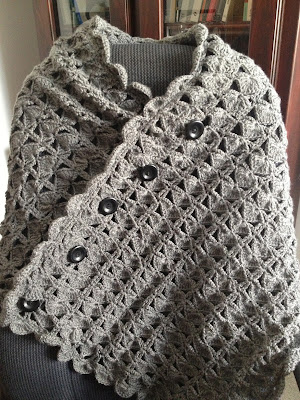 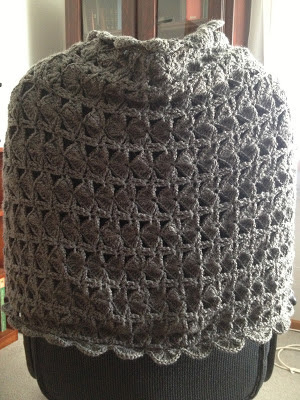 The buttons mean it can be secured in many different ways around the shoulders and I have had fun trying various styles. It is so cosy and warm!

The other 'project' which came to a conclusion, of sorts, this week was investigating Erik's cognitive, social and emotional development, particularly keeping in mind some of the challenges he has exhibited with impulse control and managing his emotions over the years.

We finally had a meeting with the psychologist yesterday, after she conducted assessments in May and Erik has been diagnosed with Aspergers. As he was diagnosed on the 16th of May, he falls under the diagnosis as prescribed by the DSM-IV which has recently been superseded by the DSM-5 on May 18th (they've moved from Roman numerals to the Arabic number system, in case you were wondering). Under the DSM-5 Erik would be categorised as having an 'Autism Spectrum Disorder' (ASD). I have yet to clarify with the psychologist whether we use the older term or new term now, but I guess that is only semantics.

We have to see a Paediatrician and Speech Pathologist, though the Psych said this was more a matter of propriety than anything else due to Erik's age (he is not eligible for any form of 'early intervention' because he is past the age of 13).

She was very concerned that the Grumpy Old Man and I, or Erik himself, might be upset by this news, but none of us are. This diagnosis does not change who Erik is. He isn't about to sprout a second head, or die. More than anything this is a bit of a explanation for why Erik is the unique and quite wonderful person he is. We are very hopeful that this diagnosis will open doors for Erik to have his particular needs met with regard to clear communication and development of skills and with awareness of the challenges he experiences with managing distraction or focusing beyond the world inside his own head (and behind his earphones).

I have also benefitted from having it reiterated time and time again that my parenting choices were - albeit instinctively implemented - the best thing for him. Through my understanding of his challenges and needs, I have been commended on having implemented most of the occupational therapy strategies which we would have been advised to employ through an early intervention program anyway. I have often wondered if the Master of Education (Early Childhood Development) I did while pregnant with Erik (and during his early years) wasn't a complete waste of my time and energy (in that this degree has never led to gainful employment) but it turns out that because I did this degree, and was also supported by a wonderful community of like-minded parents, we have managed to mitigate many of the issues faced by children with ASD and sensory processing issues. Yay us!

And being that this is the last day of Term 2 (another ending, though only briefly), we have received reports for all the boys now and Erik's first high school photos. The boys did well with Bs and Cs for all of them. They each have subjects they just shine in, and in which they can't seem to put a foot wrong with their teachers and then they each have a subject or two where they 'need to make better choices' about seating in class and allowing themselves to be distracted by, or to distract, their friends. Status quo - essentially.

at June 28, 2013
Email ThisBlogThis!Share to TwitterShare to FacebookShare to Pinterest

How sucky for the heavy spamming. I love your take on the diagnosis and how that study turned out to be of a benefit without you realising.

Totally awesome painting as well, what talented boys you have.