Today I made my eleven year old smash his iPod Touch with a hammer.

Yep, you read that right. 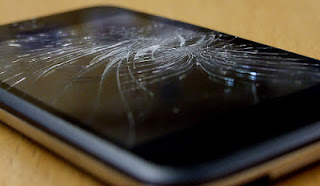 Why on earth would I do that?

Well, I found out he had established a Kik account against my specific instructions not to do so, and then when I went to delete said account I discovered he had used a friends iTunes account to download Grand Theft Auto, Call of Duty, Duke Nukem and Block Ops. These are all first person shooter or maim and kill games.

I feel VERY strongly about this sort of gaming, and he has known since the first day he had his iPod that he was not allowed to play these sorts of games. I have caught him playing Grand Theft Auto on his laptop, and withheld the laptop for weeks. I have found him on unapproved social media on his iPod before and taken that off him for an extended period as well.

Today, I was going to take the iPod away for good.

You're probably going to suggest I could have sold it. The battery was dead, had been dead for a year, he could only play on it if it was connected directly to an outlet. It could not be fixed - we checked that about six months ago.

There was also a lesson to be learned about violence and losing something important to you through violence. Apparently, in games because it's 'simulated violence' he tells me, 'no one is really hurt'. With that logic, because the iPod is not living, it wasn't really hurt. Sure, Lukas was hurt by losing his iPod forever, but I am also hurt watching my child losing his innocence through playing these games and learning that maiming and killing is 'fun'.

I'm sure you think I over reacted. Perhaps you don't feel the games I mentioned are 'that bad'. My issue was more with the deception and defiance than the games themselves - though I absolutely abhor those games.

He does have an iPod shuffle, so he won't be deprived of music.

at June 02, 2013
Email ThisBlogThis!Share to TwitterShare to FacebookShare to Pinterest

I'm pretty sure I would have done the same thing had I found my son playing those games. Good on you for sticking to your guns.

Not an overreaction. I can see this issue in my near future. I am not okay with these games either and at 6 mine is already asking for similar types(he doesn't know the names of games yet) but there is just no way.

Good on you! I think that is all kinds of awesome and an opportunity well used. Thanks for sharing, I read parts of it out to Miss 12 because I wanted her to know what other mothers were like. She often thinks she is hard done by as a result of some of the consequences of her actions. She is currently re-thinking that.

Fairy wishes and butterfly kisses to you lovely Sif x

Good for you. I think too many parents are too busy trying to be "friends" with their children instead of being a "parent" and I applaud you for being a Parent.

I was half expecting people to be alarmed that I'd made my child destroy an expensive gadget (despite it only working when plugged in).

We've had more conversations about trust, responsibility, rights and safety. It's hard to see danger when you're eleven and invincible and know very thing about everything, LOL!