When I was 18, I loved to ride in my dad's car, listening to the radio. Much of the time though I found myself subjected to the 'Golden Oldies' stations playing, 'hits from the 50s, 60s, and 70s'. It was pretty painful at times.

Yesterday, as we ran a few errands in the Green Beast (this is Clover's other name), The Grumpy Old Man and I subjected the boys to hits from the 80s. We were having a ball - their ears were bleeding, if the groaning from the cheap seats was anything to go by.

I'm one of them. I'm an oldie. I have become my dad from twenty-odd years ago, in fact, I'm the same age now he was then.

Last night I went to drinks and nibbles event with the mum's from Bryn's class. Such a lovely bunch of ladies (and I'm not just saying that because they're slowly but surely finding my blog). 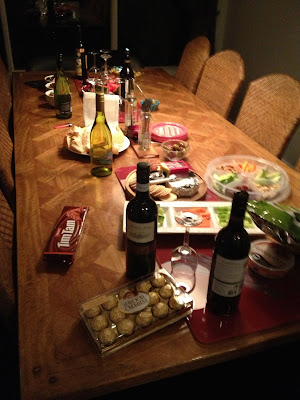 To set the scene, our primary school is very much located in middle suburbia and the parents at our school are 90% middle class and relatively conservative. The mums all have good taste in clothing (yes, I'm saying they don't wear trackies and ugg-boots, I know, I'm such a snob). Smart casual is the de rigueur of this set.

So, those of you who know me are probably already cringing...

I turned up in my neo-peasant clothing, with flowing Hogwarts style cape, and platinum blonde boy cut with hair chalk in red, green, blue and teal streaks at the front - not to mention piercings and tattoos - which were very much downplayed by the loud hair. That's me; not smart casual or middle class conservative by any stretch of the imagination. Luckily, as I said before, these mums are always very friendly and inclusive. 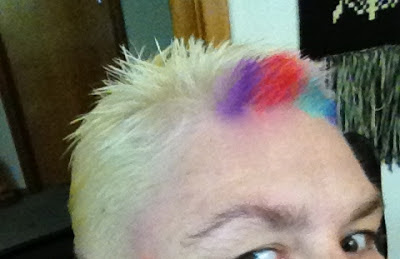 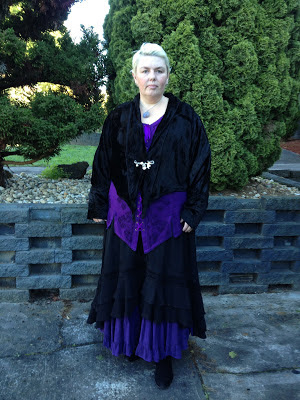 Which is why one comment I received yesterday kind of floored me. It wasn't a criticism at all, more an observation. You see, I arrived first out of the dozen or more mums who showed up and so the host and I were chatting about various things and naturally about the school and about the teachers and so on, and she made an off-the-cuff remark about how I'm probably perceived as pretty 'scary' at the school.

I had never considered this! Not for a moment. I'm quite aware that I come across as loud (both visually and audibly) and that I may seem weird to some people because of my uncommon choice of clothing, tattoos and hair colour choices. I accept that people might not quite know what to expect from me until they speak to me and that I often seem aloof because I'm generally quite shy until I am included in a conversation (and then there is no shutting me up, unfortunately, it's always all or nothing with me, you see, it's an ADHD thing).

But scary? Little old me? C'mon!

Here's another story from yesterday. I was in Spotlight purchasing some yarn for one of my projects and I was compliment on my rainbow hair by the girl behind the counter. She herself (probably in her late 20s or early 30s) had bright purple hair and a gorgeous tattoo on her inner forearm. I complimented her in return on her own style. On the way out, I thought about how friendly and gentle so many of us 'alternative types' really are. Behind our weird hair and tattoos and piercings and strange clothes, so many of us are shy and creative and just want to be liked.

We probably go about it the wrong way, but then so many of us also know we're too different to pull off the conservative look anyway, and decorating ourselves, as we do, with bright hair and tattoos and body jewellery and bespoke clothing makes us feel beautiful in our individuality. It is a form of self-acceptance that I guess other people don't really understand.

So, how does this all tie in? Obviously, I'm aging disgracefully. However, I feel I have grown so much as I have learned to love and accept myself for the person and personality that I am. I love to try new things. I don't feel that my age should limit my choices, in fact, I feel my increasing age provides me with a kind of freedom to be ridiculous. To listen to 80s music and not hang onto a need to be 'current', but also to wear what I like and put chalk or colour in my hair just like a fifteen year old. To dress as if I were living in the middle ages, but also to be a mum and a dag (great aussie expression, that!) and maybe even still confront people's expectation enough to earn the label of being 'scary' - though, honestly, I just can't see how I could scare anyone!

at July 05, 2013
Email ThisBlogThis!Share to TwitterShare to FacebookShare to Pinterest