In South Australia there is a place called Pichi Richi Pass. My parents once took me there, I think because it is near Quorn, and I somehow recall the need to go to Quorn to pick up a glider, or pilot a glider, or something to do with gliders - my parents were both glider enthusiasts for a short while in my childhood.

Anyway, we have this iconic photo taken from a trip to Pichi Richi Pass one night. 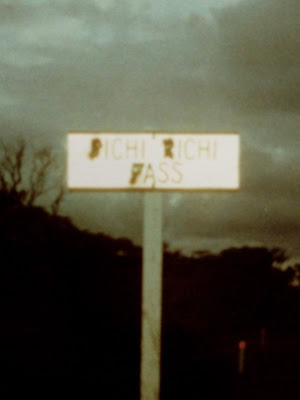 This past week I've thought about this photo often.

You see, months ago, I was diagnosed with GERD, a reflux disorder, which I've had all my life, and which did lead to an ulcer when I was 18, but which I've basically been untreated for all this time - except taking Mylanta until the ulcer healed, and then taking Gaviscon and Quickeze and the likes throughout pregnancy when the reflux became really bad.

I'm so used to reflux, I don't think about it much even though I've had it almost daily for as long as I can remember.

But then I started experiencing terrible stomach cramps a couple of months ago and my doctor sent me off for an endoscopy.

After this she put me on Nexium and boy was that an experience!

For the first week or so, I was in reflux heaven - that is, I had no reflux, I could eat what I liked and NO REFLUX. It was awesome! The end of the second week? Not quite so awesome. I was running for the loo every hour or so.

Third week, I was on the loo all. the. time! Gut wrenching gripes, and well, to be blunt, a raw and sore sphincter!

So, back to the doctor, trial another medication, and back to occupying the loo 24/7 within five days that time.

I stopped that medication as soon as I realised what the outcome was, but the symptoms didn't stop until three days later.

I waited a few weeks before trialing a third medication. Same deal as the second. Stopped.

Basically within 36 hours I was causing major delays in the morning wee express lane and if anyone asked where I was day or night, everyone else called out, 'She's in the bathroom!'

Let me tell you, we live on a corner block - and my family is loud - so I'm pretty sure my neighbours now think I'm either bulimic or have a terrible cocaine habit!

I have not been a very pleasant person to be around - well, really who can blame me, my arse has been on fire all week.

Voting on Saturday was tricky with the Grumpy Old Man scanning the school hall and pointing out toilets and exits like veteran flight attendant. I was forced to vote above the line (ye gads!) in the Senate because my bowels kept screaming, '110 boxes is TOO MANY BOXES to number, we can't wait that long!'

I did feel better yesterday, but then today the tablets made their final encore impact (I hope!). In any case, I felt it safest to cancel this week's meet with my supervisor because I hadn't managed to get any work done (the lighting in the loo is appalling, and forget dictation while involuntarily bearing down).

Anyway, it's healing time now, and boys and girls, what do we know about healing?

Healing 101: When an irritated area of skin begins to heal, it is a microcosm of infection fighting activity which often causes an itching sensation.

Au réservoir, I'm off to Pichi Richi Pass - see you on the other side...

at September 10, 2013
Email ThisBlogThis!Share to TwitterShare to FacebookShare to Pinterest