Well, we've had a lovely weekend which started on Friday with picking up the Green Beast. She does seem to be happier after her service and fix up; with new spark plugs and no more leaking coolant. We celebrated by taking the boys to the swirly-whirly park (that is not its official name, just what we call it).

We've been going there since Erik was only 7 months old. It has changed in the past decade and a half, but the swirly-whirly slide has ever been a constant and over the years, we've bitten our bottom lips as each of the boys mastered the six metre high slide. 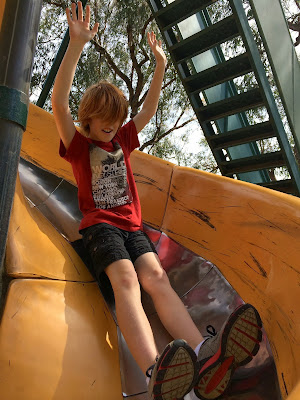 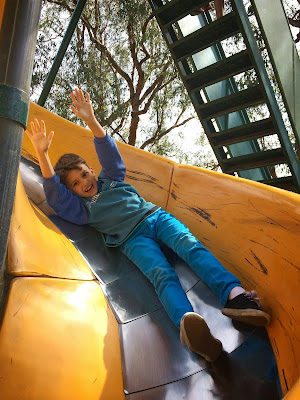 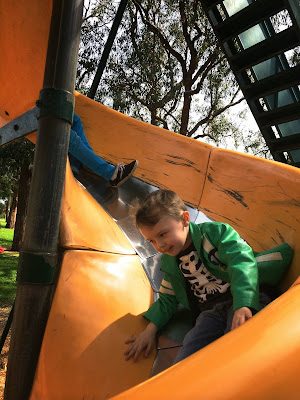 Erik didn't join us on this trip down memory lane as he is far too cool for the swirly-whirly slide these days. 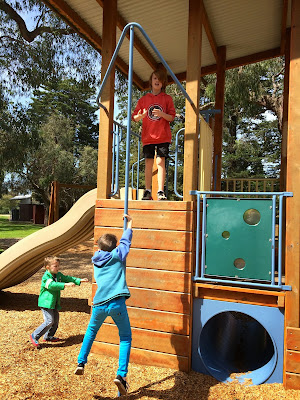 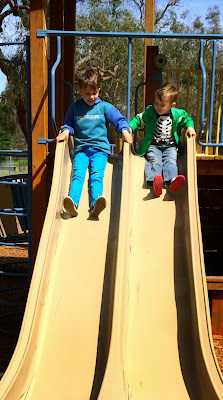 The boys were teaming with energy after a few days stuck at home. 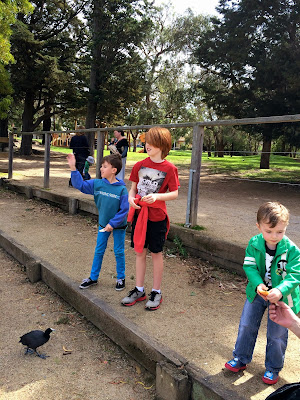 It wouldn't have been a trip to the swirly-whirly park without feeding the ducks! 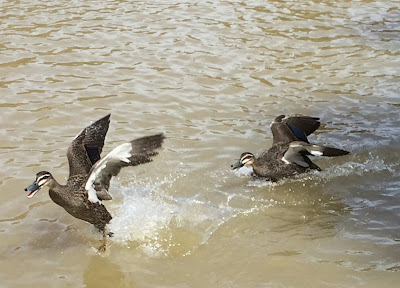 There was quite a bit of argy-bargy going on amongst our feathered friends as well, with several ducks repeatedly chasing off the one in front here. 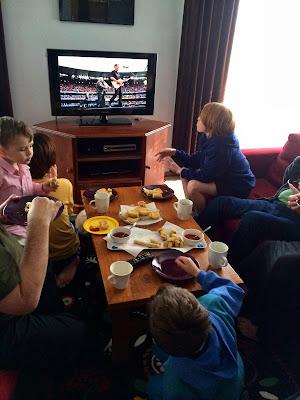 On Saturday my parents came over to watch the Grand Final with us. Erik and Bryn's team; Hawthorn, were playing Freemantle and after The Hawks loss at last years Grand Final we felt certain there would be a win to celebrate this year.

As a bonus Hunters and Collectors played during half time (Dave used to house share with the trombonist, Michael Waters).

Of course, we had to have pies - and pasties and spring rolls - followed up by pikelets with raspberry jam and whipped cream. I managed to keep away from the televised excitement by busying myself in kitchen (I'm not really a mad-keen sports fan) and fun was had by all! 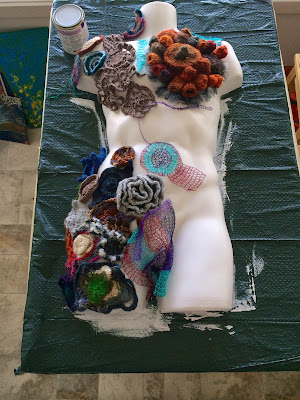 Today and tomorrow I am (and will be) working on George. I've just painted on his second coat of primer which should be fully dry by 5pm tonight. Then I'll paint a design on and let him dry overnight before affixing an assortment of pretties on him - Bryn thinks I'm making him into a girl, I will have to sit Bryn down for another chat about how outward appearances have little to do with what is going on inside a being regarding sex and gender identity.

When the first coat of primer was touch dry, I had a play with layout on George - this won't necessarily be the final lay out and it doesn't show the paint work which will underlie the decos, but I was fairly happy with this all the same.

Apparently, my 'Perfect Man' is eclectic, soft but hard, and sometimes a bit trashy, but not afraid to stand out and be noticed.

at September 29, 2013
Email ThisBlogThis!Share to TwitterShare to FacebookShare to Pinterest