I currently - for the next 7 1/2 months - have one teenager. He is fourteen. People used to 'Hoohoohoo' and 'Just you wait until they're teenagers' at me when I complained about my preschoolers. To be honest, the first year and bit of the teen years hasn't been too bad. I hear fifteen and sixteen are particularly trying with boys, so I reserve the right to change my mind, but so far, so good.

My teenager is probably somewhat emotionally immature for his age, or introverted, or whatever it takes for him to not be too much of a pain in the posterior. Yes, he wants to stay up all night and sleep all day, but actually that isn't much different from any time after the age of four - except then he didn't want to sleep during the day, so this is actually much better.

He is totally self-obsessed. He spends much longer in the bathroom grooming himself (that is what we tell ourselves he is doing in there with the door locked for 45 minutes every morning) than all the other people in this house put together.

He is interested in girls, has had a couple of girlfriends, has kissed a girl.

He is constantly plugged into his iPod. We're beginning to worry they have grafted themselves onto the inside of his ears and he can't actually take them out, even if he might want to - which he doesn't.

Given half a chance he would eat all the food in the house by himself and then ask for more, his ever-growing legs are apparently completely hollow.

So, yep, he's pretty much a typical teenager.

It would be easy to view him as a stereotype, to believe there is nothing going on between his ears except girls, food and rock and roll.

Recently though, he has said a couple of things that have made me realise there is a lot more going on in there.

The other day, he told the Grumpy Old Man that he regrets selling his tree painting. It was really good and he liked it. He said at the time he really just wanted to buy some Vans, but now he realises he was always going to outgrow the Vans and so he traded something permanent that he really liked for a temporary item that he is no longer holds any interest for him.

Then yesterday he told me that he has realised that he is the kind of person who loves looking forward to getting something, but who is never that happy with the thing he wanted so badly once he has it.

So, okay, he's pretty much admitted to trying to make himself happy by acquiring stuff he thought would make him happy - which is pretty shallow - but you have to give him credit for realising he is never quite as satisfied as he thought he would be once he has his heart's desire. A lot of adults still haven't figured that one out!

This is really the first step in asking himself what really makes him happy and whether or not having something that might impress others in the short term is worth giving up something that will satisfy him in the long term!

I'm so proud of him! 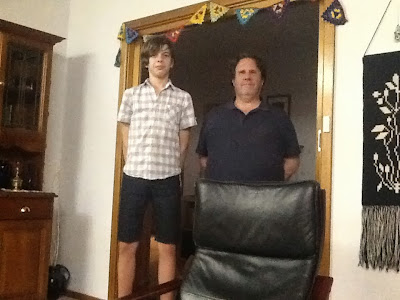 Here you see the teenagers standing on tippytoes - but in all reality, he doesn't have long to wait until he will out strip his dad in height! Also, apologies for the poor quality of the photo - it was taken on the only thing I had to had at the time, the iPad 2.

at November 03, 2013
Email ThisBlogThis!Share to TwitterShare to FacebookShare to Pinterest