Blogging after 1am - a sure sign of a busy schedule!

Man, I'm totally dropping the ball on this blogging thing, aren't I? And yet, I'm pleasantly surprised, as I check my stats at the end of each night, to see so many of you stopping by - I hope you're not crossing off days on a calendar until you stop checking!

This time of year is crazy, isn't it? 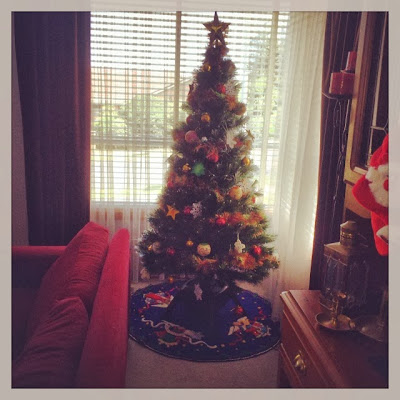 I love Christmas and this year it was so lovely to not have to actually move any furniture. I moved out globe tree to the other side of the lounge room but that was about it.

MIL finally came to visit us at this house! It took some work! We had her scheduled to come over on her birthday on the 24th, but just an hour before she was due to arrive, she cancelled. So we made a big deal of her coming on the 1st of December. I think she enjoyed herself and was happy to see us in a house that fits all of us. I think she coped better with all the kids because really, after afternoon tea and giving her her birthday presents, the boys went off and entertained themselves and so she could chat with us fairly comfortably.

Later in the week the Grumpy Old Man and I picked her up and took her TV shopping, so she was ready for the analog TV signal being turned off next friday. A couple of days later we came over and I set up her TVs for her. We did all of this while the boys were at school and kinder, so she was able to have just adult conversation, which I think she appreciated.

As I mentioned in my last post, I've been on a steep learning curve with becoming the secretary of the Mature Age Student Club at Deakin, I think I'm finally getting the hang of it.

That is a good thing because as of tonight I am also the founding editor of their magazine. I was the sub-editor, but the Editor has had to give up her positive for personal reason and so now I'm the Editor. I'm very excited by this promotion! I know it will be hard work, but I'm more than ready for this challenge (it has only taken 20 years for me to be ready for this, ha!).

In PhD news, I've spent the past two week coming to grips with Practice Led Research. My supervisor recommended I doing some research in this area as she felt it was germane to my thesis. To be honest, I just didn't get it. I read and read, and it seemed only to be a discussion of the methodology of creative writing research, more than a theory about it. I thought I was trying to find a relevant theory to either agree with or disagree with in relation to Flash Fiction.

I had a supervisor meeting this morning and my supervisor explained that because creative writing is so new to the academy (that is universities) as a stand alone research area, it has historically had literary theory applied to it, however - and this is my own analogy - that is somewhat like trying to review a meal while the chef is still preparing it. Literary theories are tested against already written and published works, but with creative writing, the researcher is creating the work that is being analysed - while it is being created.

And so, Practice Led Research is actually a working theory.

Now, there is a risk with PLR that other researchers outside the writing community will not take it as seriously because it can come across as a whole lot of navel gazing (I decided to write this because if that article I read, or that experience I experienced, or because my heritage is thus). I raised this point with my supervisor because ultimately I want to feel as though my research is contributing to a greater body of knowledge - not just talking about me and my peccadilloes, you know?

She said that the very fact this concerned me was a good thing, because she has had students who are more than happy to navel gaze. She reassured me that my interest in identity and history and ambiguity and arguing for greater cohesion within the broad Flash Fiction community will all mean I will contribute to a wider body of knowledge.

Well, phew to that!

So, remember I was talking about going overseas to a writing conference to present my thesis? Yup, well, I have to submit a proposal by Friday. Scary much! It's only very short, but basically, I will be making a poster and presenting it (sounds like primary school, doesn't it?) and then that will be discussed and I will receive feedback. All good. The scariest thing is travelling to Europe on my own, and staying in Amsterdam for week doing workshops and then this presentation. It's months away, but it gives me the willies anyway - I wish I had someone to hold my hand!

That is, if they accept my proposal.

Oh yeah. I've come to the conclusion we (parents) pretty much just have to accept that providing devices for children to take to school - whether or not this actually benefits them - is becoming the expected norm. The Grumpy Old Man and I went to Lukas' high school orientation night last Tuesday and to our utter shock and dismay, they are changing their laptop system. Whereas as we paid a modest $250 towards the purchase of Erik's laptop last year (and will again net year and the year after) and the school arranged all the maintenance and insurance, as of Lukas' cohort, parents are expected to provide their child with a laptop and window 8 Professional and have home and contents insurance which covers the devices leaving the house. We had no notice of this whatsoever - forms that went out a month ago said this would be an option but hiring would still be an option.

To his credit, the principal was great when we approached him after the orientation presentation to voice our concerns. He came up with several solutions on the spot as to how we could find assistance getting Lukas a laptop, including the school outlaying half the cost and us paying them back over time. We haven't figured out exactly what we will do yet, but we were impressed with the Principal of the high school as the Principal of our primary school has not even bothered to respond to the letter we sent her two weeks ago requesting a meeting to discuss our difficulty 'opting in' to the iPad program. So much for her open door policy!

I am waiting to hear back from Vision Australia about the bursary I applied for in October. Hopefully if I get that, I will at least be able to give Bryn my iPad2 to use at school (ha! to the trolls who carried on about me buying that iPad two years ago - turns out I may well have unwittingly invested in my child's education after all!).

Finally, tonight I emailed my Masters manuscript to a potential publisher who has expressed interest in publishing the story. Fingers crossed, it would be awesome to be a published novelist!

at December 10, 2013
Email ThisBlogThis!Share to TwitterShare to FacebookShare to Pinterest

Oh wow what exciting times for you lovely. Sending some fairy wishes and butterfly kisses your way