Erik was being homeschooled. That is unschooled. He had not attended kindergarten or prep, or grade one. He had attended a homeschooling group once a week for a period of months but as we had no car and the group was over an hours travel each way, out into the hills, late during my pregnancy with Bryn, we'd given up the long distance travel and had not hooked up with any other groups in the mean time.

One day Erik came to me and said, 'I need to talk to you about something. I have been thinking about this for a while and I know you won't like it, but I want to try going to school. I think I can't make friends if I only see people once a week, every week I have to start again trying to make friends. I need to see people every day to make friends.'

This was a moment of utter clarity for Erik. He was never very good at expressing himself clearly with words, and so this little monologue is branded onto my memory because I was blown away by his reasoning.

This was most definitely a pivotal moment in his life. Here he was going against the culture of our family, speaking up for what HE wanted. There was strong intention in his words, and it would completely change his life to go to school. It took him several years to make friends, and many times I second guessed my decision to support him in this choice, but he had spoken so clearly, so thoughtfully about this desire that I could not ignore him.

Erik had shown an interest in drawing for a about two years at this stage but his drawing has been cartoony and while they showed some ability, his output of work wasn't high or high quality. We had heard about a high school which sounded fabulous for Erik and in an interview with the principal we had come to understand that the school would preference children with a strong interest in a subject. We thought perhaps we could encourage Erik to build an art portfolio if he went to regular art classes where he produced something every week - Erik works best with externally imposed structure (though we're working on him creating structure for himself, it's a slow process). The first class he brought home a drawing of a vase, it was quite good, though quite 2D and childlike, but it was a start. The second week he brought home this drawing... 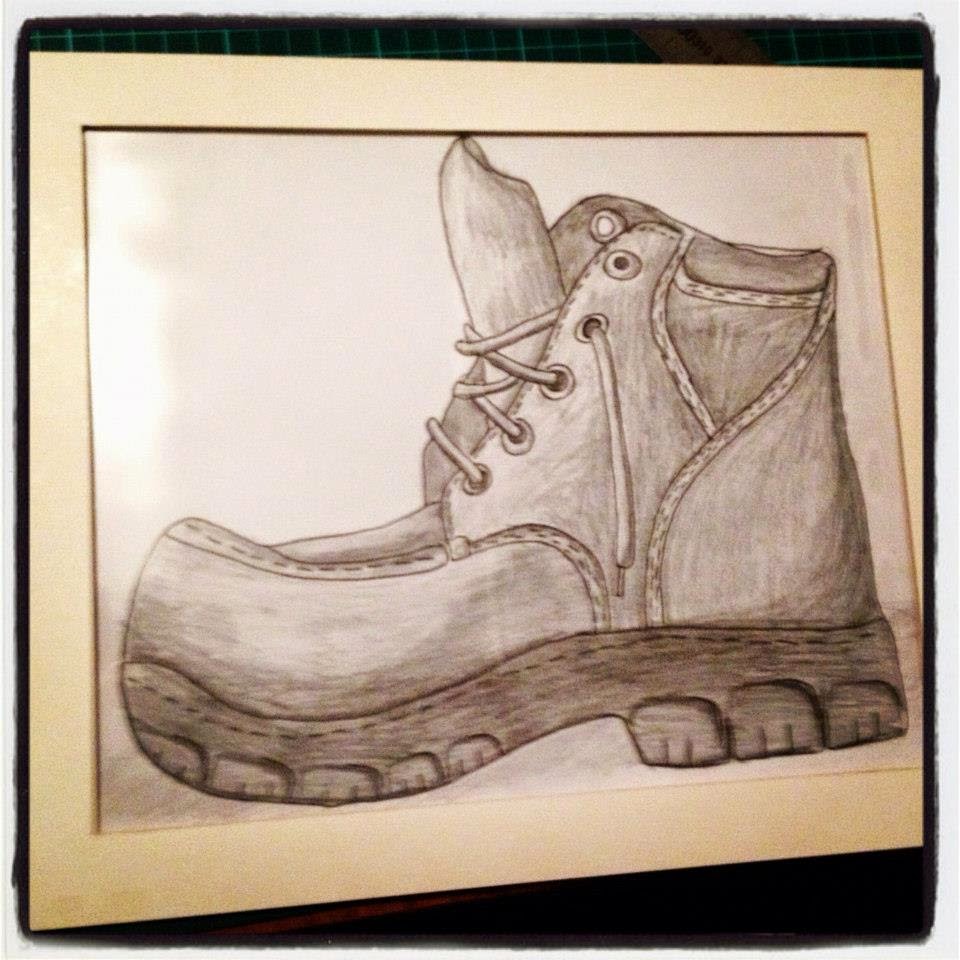 The significance of this drawing is that he did it wholly on his own without any instruction, other than that he had an hour to draw the boot on the table in front of him.

When he brought home this drawing we saw a whole new level of ability in him which then spurred us on to supporting his talent. At this moment, his life become considerably more about his artwork and learning new technique and having something to give the world for which he received a lot of public positive feedback (which means a lot to Erik - he is quite the A personality type).

Pivotal moments in our lives can be quite small; a conservation, a decision, taking the first step on a big, big journey. Often they aren't accompanied by fan fair or celebration, though sometimes they are. Sometimes it takes a lot while to recognise the point at which our lives changed dramatically and suddenly we stepped out of one reality into another, the point at which we could have chosen to stay the course and continue along one reality, but instead we turned left and embarked on a whole new life course.

I think it is good to be able to identity these moments, however small they seemed at the time, so we can recognise them again if they come along and once more we find ourselves making the choice to maintain the status quo or try something different.

at June 15, 2014
Email ThisBlogThis!Share to TwitterShare to FacebookShare to Pinterest