The Grumpy Old Man and I narrowly avoided being caught up in a collision on the way to work this morning. Two (or three, not sure) cars collided right behind us slid towards us but fortunately for us, they came to a stop before crashing into us as well. The noise of the collision was like a sonic boom. I thought we'd actually been hit but realise it was the sound wave that hit us. I still feel quite shaken by it. Ambulances were called. We briefly considered hopping out of the car and offering out assistance, but realised that might cause more trouble because of the inclement weather and low visibility.

I'm feeling quite frustrated today, and this fright has not helped.

I can't seem to locate my birth certificate, which I need to get a passport. I know I have it somewhere, but I thought I was managing those important papers better than i obviously am. I have also managed to lose Ari's birth certificate - I put in an application for it several months ago now, paid the money, but still haven't gotten my act together to submit supporting papers (one of those papers will be my birth certificate, argh!).

Also, that recumbent bike I bought a month ago, which started clunking is causing me grief. Or rather the seller is causing me grief. The bike was advertised as being of such high quality that it came with a two year warranty. Yes, well, it started clunking when I peddle after just a week. So i contacted the seller about getting details of said warranty. I initially contacted the seller about this, but didnt hear back for 6 days, so prompted him again. The seller asked me to send a video of the clunking, I didn't then didn't hear back for 5 days, so contacted him again, he asked for my address and the date of sale. Then when I hadn't heard back for 4 days, I lodged a dispute with Paypal, the seller then told me to rerun the bike for a full refund. I said I wanted it fixed under warranty, not a full refund, and I couldn't afford to return it to the seller anyway. Today the seller asks me for a video so he can assess what has gone wrong with it...

Gah! I told him I'd already sent him a video two weeks ago, but gave him the link again. Seriously, this is bullshit.

MIL confirmed she is definitely up for buying a house we can all live in. She wants us to actively start looking now. This is great. It is also very scary.

The club I'm secretary of is having its AGM later this month, and it looks like we've already found a replacement for my position. I'm very relieved. I've learned a lot from being secretary, but it is also quite time consuming on top of the PhD and just being a mum - some mums are amazing at multi-tasking, but as you can see from what I've written above, I'm probably not one of them*.

The Melbourne Writers' Festival is on later this month. I have tickets to two events and I have two other (free events) I want to check out. One of the ticketed events is on the same day as the AGM, which is also a treatment day for Erik (Erik is getting light therapy for psoriasis three times a week at the moment). So, that'll be a fun day.

Our current real estate agent rang this morning. The current owners what to get in under the house tomorrow to retrieve some things they don't want the new owns to throw away when the house is demolished. We also have a house inspection scheduled for a fortnight from now. Funny having a house inspection on a house which will be demolished in six months time.

Funny story: Mentioned to our Real Estate Agent that we're now in the market to buy, and she got very excited for us and said, 'Wow, you'll be so happy not to have to deal with the likes of us anymore!' She was quite genuine. Poor thing must realise that most tenants loathe real estate agents and loathe having to rent.

There is one shining light for me at the moment. Doctor Who, series 8 begins in just 17 days time. I have some Doctor Who themed cookie cutters which I'm going to use to make cookies for our launch party at home. 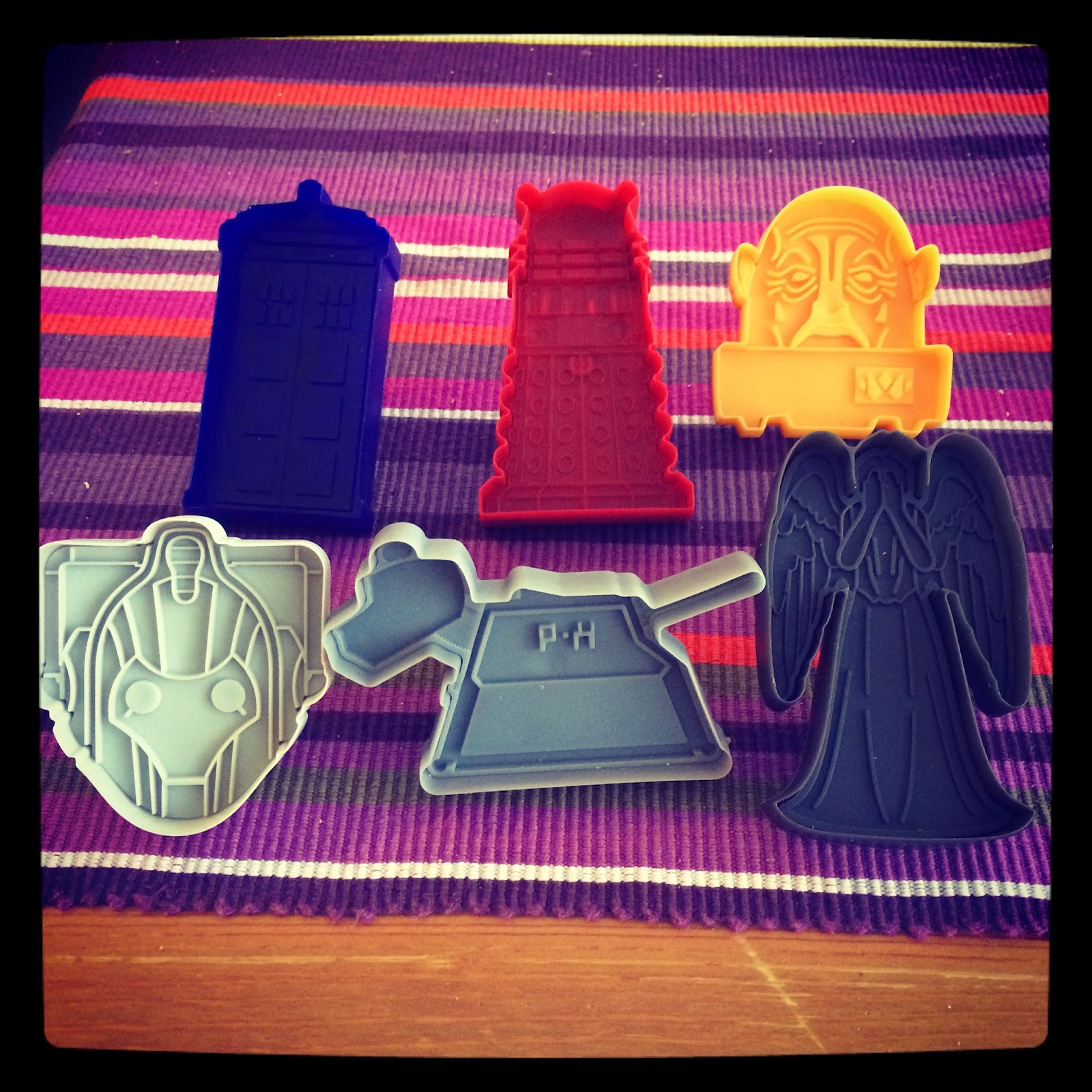 *Hello prospective employers reading this - I really am very good at multi-tasking at work, just not in my personal life. Surely that makes a difference, right? I always get work responsibilities done - this usually means home responsibilities take second place...

at August 07, 2014
Email ThisBlogThis!Share to TwitterShare to FacebookShare to Pinterest

That is a lot of stuff going on! I haven't been good at keeping up with blogs I follow for a little over a year and remember your posts from before. Such a frightening way to start the day, I hate when that happens. I like that you ended on a positive note though, something I try to do but could be more aware of!