The title of this post describes the last week for me.

Last week we had the parent/teacher/student conferences at the high school for the older two boys. That was hard work. Both boys seem to be struggling with concepts of responsibility, commitment and hard work.

I'm trying to be understanding. Puberty is a tough time. There is so much going on, and most of it is way more interesting than doing school work, but how do I get them to understand that teachers works hard to prepare classes and having students who don't pay attention, muck around with their friends, or simply refuse to turn up because they've decided they're no longer interested in the class is not only rude, but also letting themselves down.

Two of Lukas' teachers were set to jump over the desk and throttle him. I said to one that she seemed fed up, she replied that that was quite an understatement. The other teacher, a rather hip looking, friendly sort, started out mildly perplexed and by the end of the 8 minute meeting was white around the edges with pent up fury.

Another teacher, who tried to be more compassionate, and who we know to be very easy-going on kids, just seemed confused that Lukas couldn't put together sort science report each week. Especially when his lab partner was doing all the note taking on his laptop and all Lukas really needed to do was compose his own conclusions.

Lukas seems to be in something of a bromance with a school pal. Year six was very difficult for Lukas on the friendship front, and so I think he is relieved to have a large group of friends and one close friend in particular, but it seems he defers to this friend when it comes to classroom attitude and behaviour, and is also keen to amuse his friend, and in doing this he is seriously pissing off his teachers.

Erik didn't fair much better. He has been skipping on class regularly this term because he felt the workload was interfering with his other school work, so rather than approaching the teacher to discuss this (and negotiate the workload, which is absolutely possible at this school), he decided to avoid the class altogether. He has improved in English, so he had one happy teacher. His sports teachers said he was a natural leader, but needed to be aware of how he has the power to influence other students for good but also for not so good. His maths teacher is living in denial, I think, and not doing him any favours with her overly positivist attitude to his ability in maths (it's great that she wants to encourage him, but she's not seeing the forest for the trees).

On Wednesday we had a well overdue rental inspection. So all day Wednesday was spent tidying and cleaning, so that the real estate agent could walk through the house in less than five minutes, snapping off photos of each room, then leave.

Thursday my dad arrived unannounced. It is always great to see him, but I have to admit I was already exhausted before he arrived and then the upheaval of having an unexpected guest just wiped me out. He stayed the night and there was much wandering down memory lane and some sharing of difficult news, so it was emotionally quite a tough 24 hours.

Saturday, I stayed in bed all day. Even so, I could not relax. I think I'm far too tightly wound at the moment. One good thing to come out of Saturday was that the Grumpy Old Man located my birth certificate, finally. I STILL haven't received the birth certificate I spent $70 odd on well over a month ago now. When that finally arrives, at least I'll have two.

Yesterday I went to my brother's again. It seems I've stuffed up the healing of the fob watch I had down the previous weekend. Mike has given me new instructions for rectifying the situation and it will take a while longer to heal now, and then he'll have to redo do the entire tattoo.

I did have a new one done though - still working on that half sleeve on my right arm... 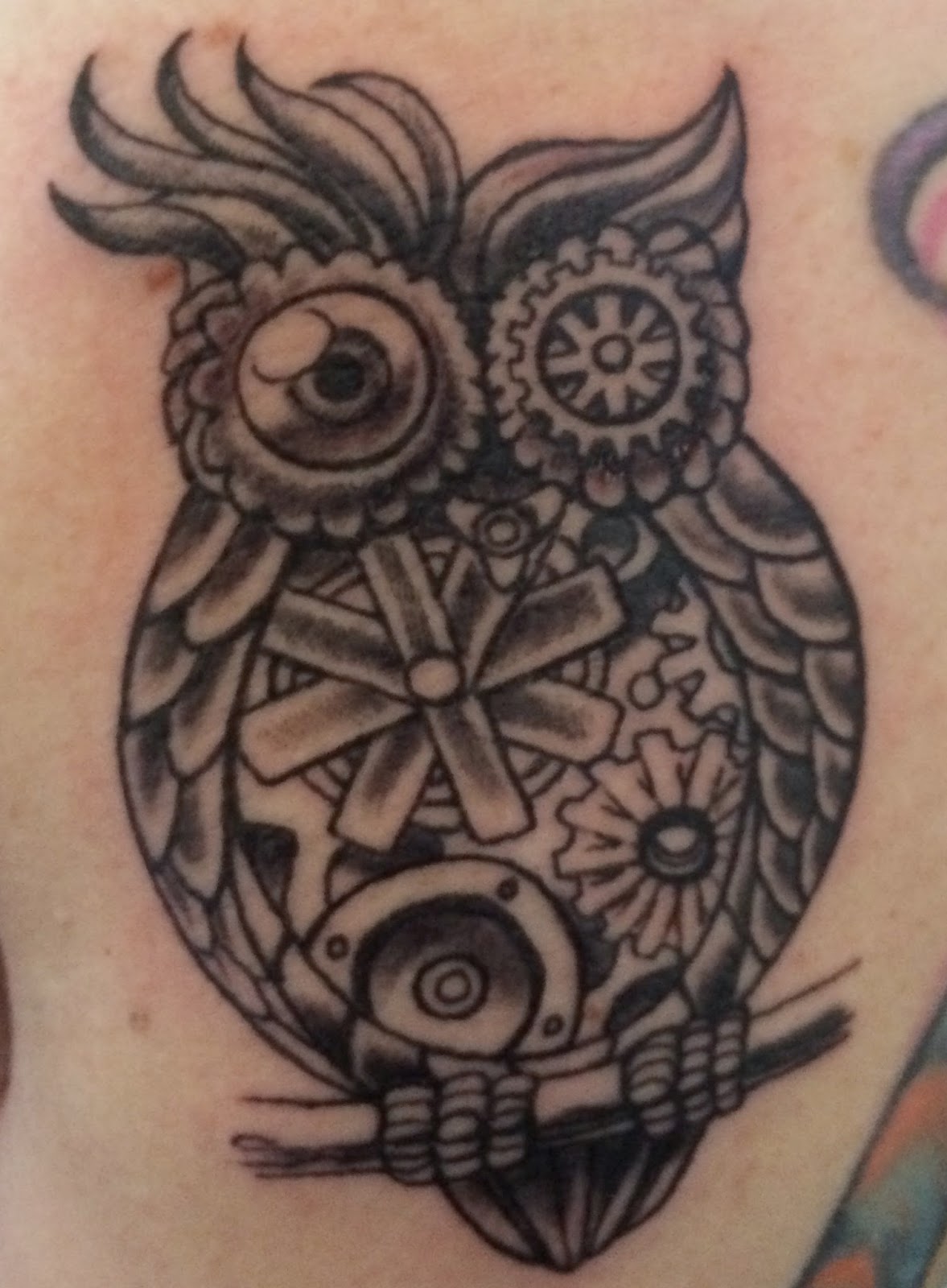 I am so, so happy with this original design! This is only the linework and shading - colouring will be added to it in a couple of weeks or so. The left eye cog represents my blind left eye. And, of course, owls represent education and wisdom (one of which I am gaining, the other I hope to have one day).

Today, I'm back in the office after a week. I have just finished doing, what I hope, will be the last of my secretary duties for MASC. I do need to add a couple of members to the membership spreadsheet, but that's okay. I need to be finished with this role, it is distracting me from my work.

I really need to get my head around this paper, which is now due in 15 days (not including today). I think I need to let go of the chapter I wrote previously and instead focus on writing a tight outline and then filling that in. Start from scratch, so to speak, but use parts from the chapter as fillers in the paper (possibly rewritten, but using the quotes and references I used before). Starting that outline will be this afternoon's work.

at September 15, 2014
Email ThisBlogThis!Share to TwitterShare to FacebookShare to Pinterest