Desperate times call for desperate measures, as the saying goes.

I am, and I'm sure many of you can relate to this, entirely over the nightly ritual of 'What's for dinner?'... This is a phenomenon which has its own meme (for those of you lucky enough not to have kids). See! 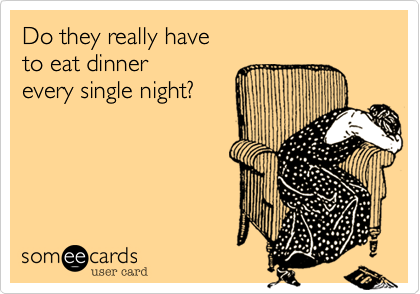 Yes, we suffer from this too.

The Grumpy Old Man is the cook around these parts. He used to love cooking. He hates it now. Partly because he's tired when it comes to cooking time, partly because none of us can agree on what constitutes an appetising dinner - there is always someone pushing their plate away and declaring a lack of appetite. It's a thankless job and over the past 18 years of cooking for us, we have managed to suck all the joy out of the process for the Grumpy Old Man, like blood thirsty mozzies on a summer's eve.

But also, even though we have about 30 dishes we rotate (I know, I can't believe we have that many either, but I counted, it always felt like we ate the same five things over and over, but no), we're heartily bored of every single one of them. Gosh, we're spoiled! I remember as a child, we ate fish and potatoes a LOT while living in Iceland and we didn't complain, much, I think... For eighteen months when we were particularly short on cash it was Maggi packet soup every.single.night.

The GOM's mum did the 'Salmon Mornay Monday, Chops and three Veg Tuesday...' thing. He always knew what was for dinner so he didn't ask. Sure he was bored to tears but at least life was predictable and he never got his hopes up for Chicken Tikka Masala or Green Thai Curry!

So, I've decided we're going back to basics. We're going to eat real food (by real, I mean it won't come out of a jar or a take away menu). We're going to rotate about 18 dishes over a three week period and aim to have a roast each Sunday.

I've written out a three week schedule of meals, so the next time the kids come and ask what's for dinner I'm directing them to the schedule! I will only consider changing the schedule once we have completed it three times, at that point if people agree that they HATE a particular meal we can substitute it for something else. This way, the GOM won't have to pull his hair out wondering what to cook, there will be far less temptation to just order take away, and our shopping will becoming wholly predictable!

Hopefully we will also see some health benefits from eating whole unprocessed foods - time will tell!

at December 29, 2014
Email ThisBlogThis!Share to TwitterShare to FacebookShare to Pinterest