Audacious Aud and some of my other awesome ancestors...

I've had a big week in my PhD this week. I spent nine hours at uni on Tuesday catching up on work I had not managed to do last week or over the weekend. I'm learning a LOT about historiography, which is something I could not have predicted. Specifically, I'm having to come to grips with Icelandic historiography, which turns out to be quite divergent - now why is that not surprising?

I remember learning history through the family sagas at school, but I couldn't tell you much about what I learned - my Icelandic was very basic and while I got by well enough, I guess the particulars of any one story did not stick with me.

Yesterday, I was researching an ancestor of mine - Aud the Deep-Minded. In the book of Icelanders, online, it is possible to trace an Icelander's family lineage back over a 1000 years and so I can see how I was related to this historical figure through my mother... 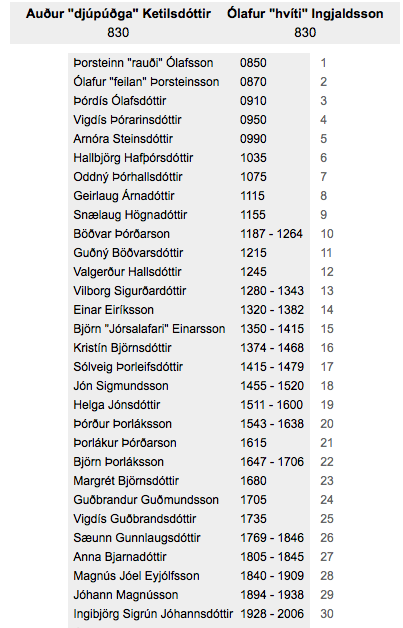 This list goes down to my maternal grandmother, so beneath her is my mother, and then me.

Aud was all sorts of amazing. She was living in the Orkney´s after she and her family fled Norway after losing  battle against King Harald Fairhair. When her husband died, she married her daughters off to Scottish kings and noblemen, then captained a ship and sailed to Iceland where she claimed land as matriarch of her family. She´s credited with bringing Christianity to Iceland, as well as bending the gender roles, and setting the tone for matriarchy in Iceland. So, it is kind of awesome to know I´m her descendant!

Another descendant I found out about today was the very first settler in Iceland Ingólfur Arnarson. 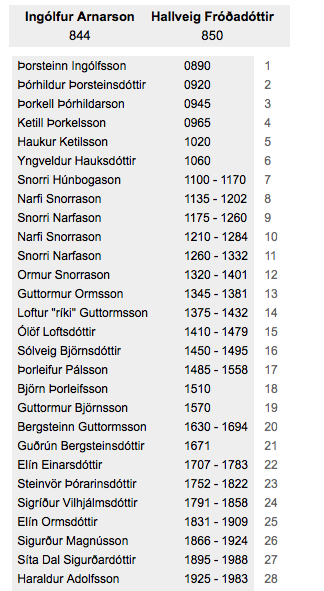 I´m a 30th generation descendant of him through my maternal grandfather.

But, let´s not stop there... Prose Edda, heard of the Prose Edda? Well the author, Snorri Sturluson is also an ascestor, going back 23 generations.

Okay, so I have a confession. My eldest´s son´s name is Erik and we´ve always told everyone he is named after my ancestor Erik the Red... Strictly speaking, we're *only* related through marriage. Erik's the Red's wife's grandfather's wife is my direction ancestor through my maternal grandmother... 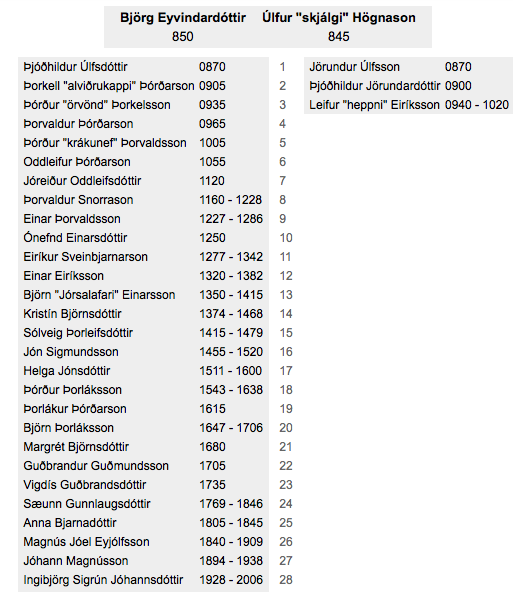 But he totally counts, anyway. Besides, When Erik the Red was exiled for killing someone, it was Aud who gave him land in Greenland for his family to stay on.

Finding out all this stuff is a fun side-effect of doing this thesis!

at April 17, 2015
Email ThisBlogThis!Share to TwitterShare to FacebookShare to Pinterest