It's been a big week.

On Monday morning, I was picked up at 8.30am and driven to the Guide Dogs Victoria campus in Kew for a three day introduction to guide dog handling. It was intense. On the first day I remember being shocked at about 11am when I realised we hadn't even had lunch yet, we'd already done so much!

I didn't walk the dog on the first day. That day was all about meeting my temp dog, Ziggy. I waited in my room and he was brought to me, and then we were left alone for about half an hour so he could get used to me. Ziggy was quite aloof and that was a bit hard for me because I'm something of an animal magnet. Dogs and cats love me and usually I get an enthusiastic greeting right off the mark even from animals who have never met me. Ziggy was not going to be won over that easily. So my first lesson was, 'Don't take it personally, I just don't know you.' 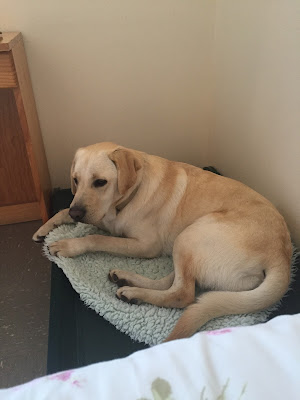 Still and all, he was very willing to please and quickly to follow all my commands. I learned to have him sit and stay while I opened doors, and heel as I went through them. I learned to asked him to be 'steady' if he walked too fast for me, or to 'huphup' if I needed him to pick up his pace. We trained together with the commands to 'stay', 'down stay' (lying on the ground) and did recall training, where he was expected to come to me on the command 'come' and to touch my closed fist with his cold, wet nose, and sit, so I could grab his collar and reattach his lead - he loved that game because as soon as he came and sat, he was rewarded with a treat. He never missed a beat!
He wasn't as keen on doing 'down' when it came to meal times. Sitting under my chair took the entire three days to establish, but finally at the final meal before I left, he went down on the first command and allowed me to slide him under my chair.
On the third day, he also greeted me with enthusiasm after spending an hour in the office while I went to Station street in Fairfield for cane training without him. We were good mates by the end. 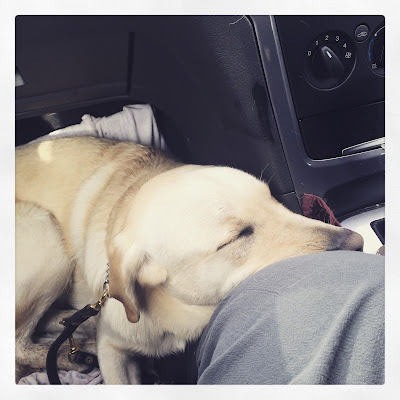 He never did warm up to being groomed though. Again, I think it came down to the 'We don't know each other THAT well, woman!' factor. Grooming is a pretty, um, intimate activity, but it has to be done.

Thankfully, toileting is not an intimate activity. Guide dogs poop in bags! This has to be the best thing ever invented, I have to say. I dreaded the idea of poop hunting with a bag on my hand, but had nothing to worry about. The handler puts a harness on the dog's rear end and the poop goes right in the bag. Brilliant!

The cane training was an eye opener as well. I was taken by my mobility instructor, Joi, first to High street, Kew, and the next day to Station street, Fairfield, for some cane work because I was finding the cane very annoying. It felt like it was vibrating in my hand when I swiped it across the ground. It turned out there was a cracked ball bearing in the tip of the cane. Replacing the tip didn't entirely remove the vibration - because the ground is obviously not always smooth. In the end, while talking to Joi about how different sensations affect me, I realised this was a sensory integration issue probably related to my synesthesia. The synesthesia is probably as a result of my overall condition and brain structure, so tangentially related to my vision impairment.

Speaking of vision impairment, I discovered something else. Walking in two places I didn't know, I realised just how much I use me memory and recognition to orient myself, as opposed to actually seeing objects clearly, I tend to recognise familiar. I'm thinking over the past year and a half I've lost about fifty percent of the vision I've had most of my life. I am very aware now that I can't see anything clearly, there are no sharp edges any more, and most of the time I feel like I'm looking through gloom, with little black spots flickering in front of my eyes constantly. At the same time, my eyes are becoming ever more sensitive to bright lights. But the hardest part is not being able to focus at all now.

While all this has been going on, mum has been in hospital. About six weeks ago she came down with what we thought was laryngitis, but instead of going away after a week, it persisted and became a chesty cough, which became bronchitis, and eventually pneumonia. Mum went into hospital on Sunday, had to lungs drained on Wednesday, and today they've diagnosed her with vasculitis and she is going on dialysis over the next few days to clear her blood and relieve the symptoms, particularly in her kidneys. Argh, fun and games, but we're all relieved to finally have some sort of diagnosis for what has been ailing her for months (even before the laryngitis), and to find it is something that can be treated and has a good prognosis if caught early (which it has been).

It's been a week of clarity in many ways.

at June 05, 2015
Email ThisBlogThis!Share to TwitterShare to FacebookShare to Pinterest