How do I get people to understand I'm going blind..?

It is hard for people to understand that I'm actually, really, truly going blind. My vision has been static since I was three, and so most people in my life (except my parents, I guess), have known me while my vision was static.

This year has been a very difficult one for me. I really hate to all 'poor me', that is not how I roll and so a lot of people don't recognise my struggles, 'I can't even tell you're vision impaired!' they say - it takes a lot out of me for them not to be able to tell. A lot. Privately, that gets me down quite regularly, but I refuse to be a victim, so I don't go there.

On a positive note, the forum I have been attending for the past seven Saturdays, has been a wonderful salve for me. Being with other people going through the same thing as me has really helped me. We have been able to talk out our frustrations, our fears, and the most particularly the feeling of isolation and alienation we have experienced through the loss of vision.

In the past couple of weeks I have noticed my vision has dropped further, which has been even a bigger shock to me than the vision loss I've experienced the rest of this year. It's the frog in the pot thing. If you put a frog in a pot of luke warm water and warm it up slowly, the frog doesn't realise he's being boiled until it's too late. If you were to throw a frog into already boiling water, he'd definitely notice.

All this year I've been the first frog, but in the past couple of weeks, I've suddenly shifted into being the second frog.

Three incidents have high lighted this for me.

1. I was catching a train locally, at a station I know extremely well. As I headed towards the wider gate where they let people through who have a travel pass, I couldn't see a staff member to let me through. This is annoying because it means lining up at the little window and waiting and waiting to ask for someone to open the gate when it only takes a second to walk through if the gate is manned. Anyway, as I walked a bit closer on my way to the window, I realised there was a staff member standing at the gate in a high vis. vest! I simply hadn't seen him when I was three metres away.

2. I was walking home and as I approached the curb to cross a small street, I saw something black and bulky laying over the footpath on the other side. I was a bit bluffed because I thought it might be a dog, and I didn't want to get too close to a big dog like that who was possibly laying out front of its home ready to guard its property. I crossed the road, and came within a metre and a half of the thing very cautiously. That's when I realised the black 'thing' was a teenager crouched over his shoe with his school bag behind him on the footpath (totally blocking the footpath mind you, kids!). Again something I might have seen a few weeks ago, I just couldn't see.

3. I was walking to uni along Burwood Road and out front of MLC, I saw another huge black thing on the footpath. I could not tell what it was until I got to about three metres away, and then I realised it was huge motorbike parked on the footpath. I looked around for the owner, as my investigations with my cane told me the only way around the bike was up an embankment and I didn't fancy attempting that. Suddenly the voice of a man was right next to me (have no peripheral vision). He was, again, wearing a high vis. vest. I thought he might be a community worker, but he told me he was a cop, and then offered me his armed and guide me up the embankment and around the bike. Directly on the other end of the bike was another officer I hadn't been able to see when scanning for help.

Shit is getting real, folks. 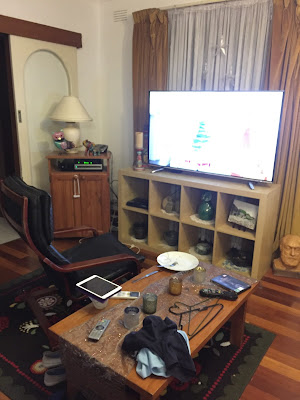 People make all sorts of assumptions about what I can and can't see. Of course they do, they can't experience what I am seeing, or how I am seeing things. It is difficult to explain. I have many people tell me many times that their vision is worse than mine, often qualified with 'without my glasses'. The thing is, no glasses work for me, so they can't understand what it is to have my vision.

A couple of years ago I had fifteen percent vision in one eye (none in the other). Within about a few metres, that vision was quite clear (from what I understand clear to be - of course, I've also never experienced full vision, so I don't know what that means, either). Now I have no clear vision at all. My field of vision hasn't changed (I still have the same amount of tunnel vision has I've always had), but the quality of my vision is much lower than it used to be. I can't read text on paper, and I can't see faces anymore. I can't make out a person from a bag or a dog at 2-3 metres, but in a familiar environment I can more or less navigate quite well still.

Recently, I've been told on several occasions that I've walked right past people I know well. I simply didn't see them. The smart ones will call out to me and identify themselves, but on a couple of occasions people have thought I was ignoring them on purpose. I am not, nor have I ever been, the kind of person to ignore people. I actually say hello to people I don't even like, because I believe in being courteous, especially when other people aren't. Also, I have thought I saw people I didn't see. I have mistakenly identified someone as the wrong person because they move similarly, or dress similarly. I am still coming to terms with what I can and cannot see. All I can do is apologise.

So, being at this forum has been amazing because I've discovered it is not just me going through these experiences. And, more importantly, I've learned these are not my issues to solve. I am not at fault for not being able to see things or not being able to see people. I don't have to feel guilty for other people's projections on me, those are their issues, their insecurities, their lack of understanding.

This has released me from always taking responsibility for how my low vision, and my current vision loss, impacts on other people. I'm not doing this TO anyone. I have enough on my plate without taking on other people's issues.

I'm sad that these meetings have come to an end, but we have plans to catch up in the future, so that's something. I can see (ha!) that a couple of the people from that group could become good friends.

Today we went to the Vision Australia subsidiary - Seeing Eye Dogs Australia (SEDA) - and had an information session. They pretty much run the same way as Guide Dogs Victoria, but on a somewhat smaller scale at the moment. We met a gorgeous Golden Retriever named Elliot who some very lucky handler will be matched with soon. Today's visit served only to increase my longing for my own guide dog. There is so much new development going on in my suburb and a dog has the benefit over the cane of being able to 'find the way' around obstacles, or let you know there is no way around.

I need to find the time to arrange things like a disabled parking permit, a companion card, a few tech lessons on how to use voice on my various device (well, use it better, that is). I still think I need to go back to finish my course in Braille. I had to drop it earlier this year because of the pressures of the PhD, but in the long term I need to be able to read more than I need to be Dr Dal (though I still really want to be 'The Doctor', ha!).

Tomorrow I'm off to Swinburne for the AAWP conference. Navigating a place I don't know always makes me nervous - which is why I'm sitting here in the middle of the night letting it all out on the blog. I'm not presenting this year, and so I'm really looking forward to just getting in there and learning some interesting and useful stuff and meeting with all the people. One of my flashes is being read out as part of a moving literary 'train' around campus. It's embarrassing, but it will be over quickly and at least I have a good reason not to read it myself!

Gosh, this post has been long - I have a lot to sort through.

It would be nice if other people understood what it is to go blind. For most people, like me, it's a piece-meal experience which, while having the benefit of allowing for acclimation, also means others don't notice the change as much, and then make all sorts of assumptions about what I can and can't see now. I don't have the energy to worry about other people, going blind is incredibly energy sapping. Going blind while doing a PhD is incredibly energy sapping. Going blind while doing a PhD and parenting four children, two who are teenagers, one of them with Aspergers, as well as two who are still quite small, despite being 10 and 7 and need to feel heard and seen despite all the other pressures in mum's life - it's draining.

So everyone else just needs to take care of themselves and stop putting all their issues onto me. I can't be their scapegoat.

at November 29, 2015
Email ThisBlogThis!Share to TwitterShare to FacebookShare to Pinterest