Living in fear is not living... 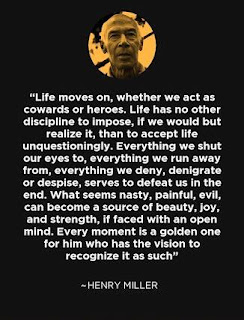 I came across this Henry Miller quote today and it really spoke to me. I know too many people who live in fear. They fear being laughed at, or they fear failure, or they fear pressure, some even fear boredom. So many people who abdicate all responsibility for their lives. It is always someone else's fault they are miserable and fearful. They feel the world is out to get them, and they run and hide in fear. It's the fight or flight response - each is a form of survive, but one leads to a life in a dark, dark cave. The other may lead to embarrassment, sadness, or even nothing much and these things may feel akin to a sort of death, but it's a death with your eyes open and the sun on your face.

Living in fear is no life at all.

I suffer from anxiety, I am medicated for it, but I still live with it. Still, I fight the fear anxiety brings tooth and nail, just because Fuck Living in Fear.

When I fear something - loneliness, confrontation, rejection - I run at it. I throw myself at it. Otherwise, it will follow me forever, and really, who wants that?

I very much have a fight, not flight, reaction.

Luckily, I encountered a person who was as fierce as I am now. She told me to get up and get out of the situation that was killing me. She saw my fear and said what she had to say anyway. I could have crumpled at the sound of her words, but instead they gave me the strength to act in spite of my fear and from that I learned to run headlong at my fears because what was the worst that could happen? I could die? Maybe, but a life in fear is death.

I have nothing to lose from facing my fears and fighting them tooth and nail. I have a life of living to lose if I cower in fear.

at November 06, 2015
Email ThisBlogThis!Share to TwitterShare to FacebookShare to Pinterest