I would describe it in one word as 'unexpected'.

I didn't expect to be losing even more vision this year and getting the process started for getting a guide - and then being matched with a dog before Christmas. I've been very impatient since I went to the assessment stay in June, but this time last year, I honestly hadn't even made up my mind to take this step. I thought it was twelve to eighteen month process before June, so this has - in reality - happened much faster than I expected it would. Only eleven days to go!

I didn't expect that I would not get back to doing braille after last summer's hiatus. The pace of this year ramped up a lot from last year in the PhD. I always thought I'd get back into braille classes in February, but by the time February came around I knew I would not be able to practice as much as I needed to. I'll be getting back into it in 2016 as I am steadily seeing the increasing necessity for this skill.

I didn't expect to actually go to Iceland - I had hopes, but really couldn't see it happening, it still felt like a pipe dream at the start of this year. Somewhere in the back of my mind, I thought my plans to do fieldwork in Iceland would becoming waylaid. I thought the Grumpy Old Man might not cope without me there for a month (boy was I wrong about that!). I thought it was all too good to be true.

I didn't expect Bryn and Ari to be changing schools mid-year. It was for the best, but not without some heartache. Fortunately, the boys have settled in quite well, with a few wrinkles yet to be ironed out in 2016.

I never expected to lose my closest friend of over a decade. In hindsight, I probably should have. While we were in some ways moving more in the same direction this year, in terms of life philosophy and lifestyle choices, we were very much moving apart. Ultimately, I have to thank her for having the insight and courage to do what I wasn't able to do and end it. Letting go can be painful, but it can also be liberating.

I never expected to find myself with a whole new social group of like-minded people who brought a completely new perspective to my life. A new set of understandings into my world that really helped me to understand myself better, and also to accept things about myself I had long ignored.

I didn't expect to have a tooth pulled, though I do expect this might happen a few more times next year.

I didn't expect my fourteen year old to grow taller than me this year.

I didn't expect MIL to still be living in her own place, or maybe even to be still living. Part of me thought Christmas 2014 might be our last Christmas together.

I didn't expect my own mother to be on the brink of death and to end up on life-long chemo. Thankfully, she took herself to hospital with only hours to spare and spent over a month there while the doctors figured out what was going on. Thank goodness for public health - mum would have died without it.

I didn't expect we'd be buying a new car! It is such a relief to have a car that doesn't sound like it's going to splutter to a stop in peak hour traffic.

So, this year, I learned that things happen that you may never expect. To be completely sappy, there is a world of possibility out there, it's a crazy ride of light and dark, and if you just keep breathing there is a lot to discover! 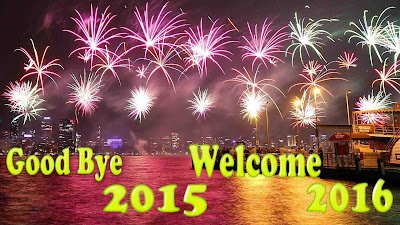 at December 31, 2015
Email ThisBlogThis!Share to TwitterShare to FacebookShare to Pinterest