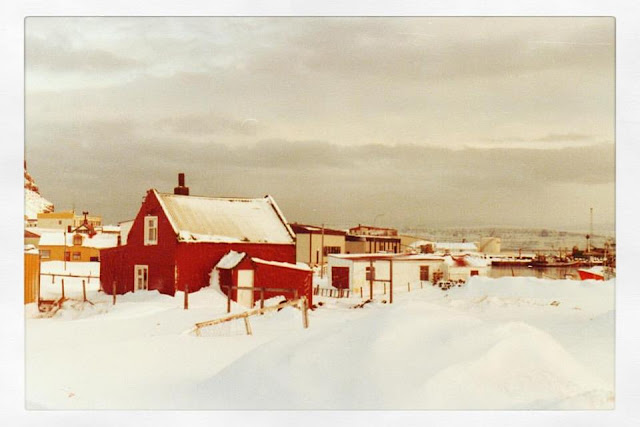 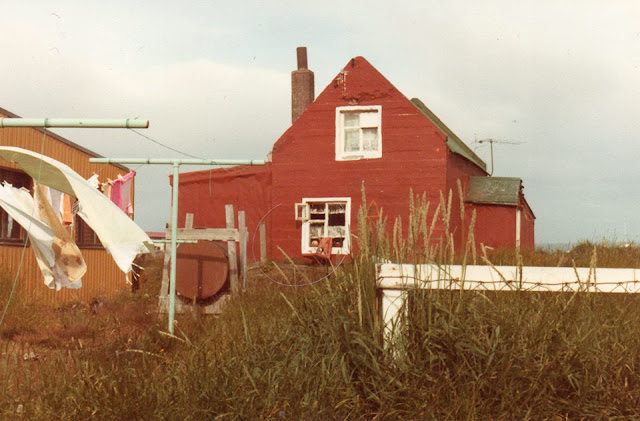 Another family home photo was uploaded to Facebook last night. This was also my grandmother's - you can see her yellow house in the background (the black tar-paper there on the left of the red house). This little red house was tiny, that front wall was about five metres across, I reckon (I'm trying to figure it out by remembering the layout of beds up under the eaves upstairs). Downstairs, you walked through the little white door there into an enclosed verandah, the toilet was at the far end. Boot, coats etc. came off there - because they'd be wet. Then through the front door there were steep stairs directly to your left leading to the attic bedrooms - the attic was divided in two, though towards the end of the house's life the dividing wall was knocked down. Downstairs was an 'open plan' kitchenette/living area, in the main part of the house, and in that little annex at the back was a step up to a sitting room and tiny bedroom (Amma's double bed filled the bedroom). I remember at one point, this house was being set up for my family to live in it, then I remember my Amma lived there for a while with my aunt and my cousin, I think - and my cat was born there. At another time, I think Amma, three aunts, two boyfriends and a cousin were living there? I'm not sure - there was always a crowd - every person having their own room was quite unheard of in our family!

The piece of land this tiny house sat on was quite large and was marked off by a low stone wall, as you can see in this photo which was taken from the point of view standing in front of Amma's yellow house, looking over the river and the yard of the red house. 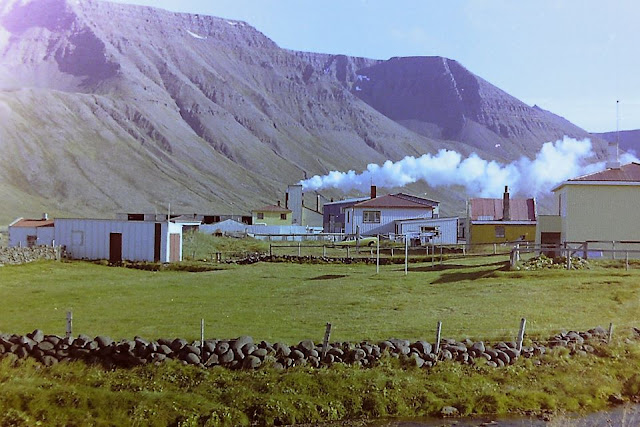 In summer my brother and I used to play in that yard, eat the sweet stalks of the grass. I loved the feel of those stones, I imagined they had been there forever, for hundreds of years - maybe they have. According to Wikipedia

According to Landnámabók Þuríður Sundafyllir settled in Bolungarvík around 940 along with her brother Þjóðólfur. Folklore says they had a disagreement and put a spell on each other, as they were both skilled sorcerers. Þuríður laid on her brother that he would spend eternity as a monolith on which all birds would defecate. Þjóðólfur in turn hexed his sister that she would forever stand where the wind blows most. The pillar that was said to be Þuríður collapsed in half in 1936. The legend says that same night "Þjóðólfur" sank in the sea. That night their spell washed away into the sea.

I guess when you grow up with such a rich sense of heritage, such a connection to land, roots, it fills your spirit so you don't feel so poor or vulnerable. Maybe this is why first peoples, robbed of their culture and robbed of their connect to land feel so lost and no amount of money or substitute culture can fill the gaping hole that is left behind. In the meantime, I wonder if a lot of post-industrial Western society has become so disconnected from land and roots that it has created the sense of poverty so many people suffer now where there is simply never is enough to make them happy. Whether it is acknowledgment, praise, pity, love, money, things, or admiration.

at June 23, 2016
Email ThisBlogThis!Share to TwitterShare to FacebookShare to Pinterest