Chances are you're not a loner... 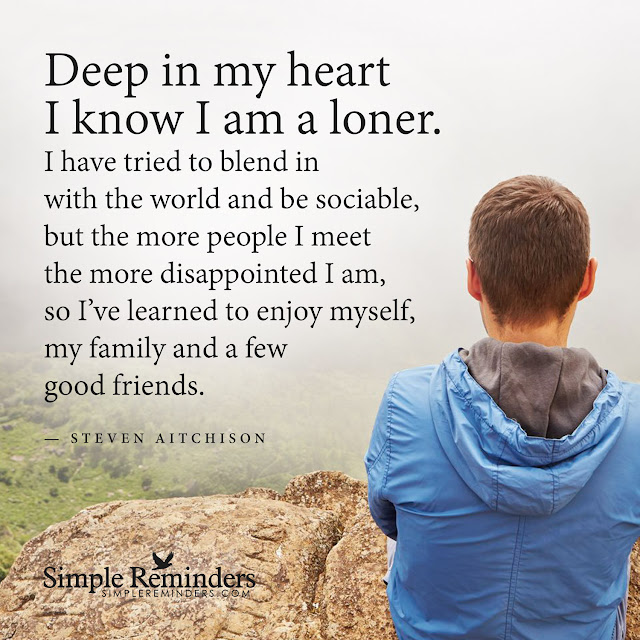 I saw this poster on social media this week and I thought, what a strange way to define a loner. If a loner is now someone surrounded by family and a few good friends, then aren't most people loners? It's a bit like the poverty thing, people crying poverty when what they mean is they can't afford a holiday, or they can't afford copious discretionary spending. I would have thought a loner was someone who didn't relate to people, a hermit, someone who kept very much to themselves. Just as a poor person would be someone who struggled to meet their basic needs, not someone who could afford organic food, new clothes every month, and subscription television.

I wonder what it is that has people looking so hard for the deficit in their lives these days. To have family and a few good friends is to have a lot. That is not to be a loner. There are people in this world who truly have no one. I have found whenever I have said that I cannot relate to other people, that I feel like a completely different species, that I feel like I stand outside of every social network I know and cannot properly connect with other people, that people can relate to that. Most people know what that feels like. Apparently, that feeling is very common. So, if you feel strange and alien and like no one gets you, at least you can console yourself with the knowledge that you're not alone, most everyone around you feels exactly the same way!

As it turns out, we're, none of us, that unique... As for being loners, very few people are true loners, except for the barriers they create in their own minds.

at June 21, 2016
Email ThisBlogThis!Share to TwitterShare to FacebookShare to Pinterest