I wanted to write about Lukas today.

So much of focus has been on Erik over the years - because he needed it - and often I have felt this was to the detriment of the other kids.

Lukas is turning fifteen this month. He's always been a bit of a strange one in the family. Quite laid back, but the one we know can explode if his somewhat length tether is yanked on...

He's the milkman's child. The odd man out in the family portrait. Our golden haired boy.

When he's trying to get out of doing something he doesn't want to do, but doesn't know how to just say no, he giggles nervously, like a little girl.

He is mature and sensible for his age. He sees the lay of the land and flies under the radar wherever possible. He's phlegmatic - he takes after his late paternal grandfather in that way.

Lukas' greatest fault is that he is lazy as the day is long. It's probably the only thing he really works hard at. This used to worry me quite a bit. The kid would only ever put in the bare minimum effort. He would rather starve than get his own breakfast. Even now, even though his bedroom is quite small, his clothes end up dropped on the floor where he stands, rather than in the clothes hamper less than an arms length away.

When we were looking at high schools and we were interested in TC, we were outside the zone and the school had an unofficial cap on numbers and were choosing kids on motivation and ability. Getting Erik in wasn't difficult because of his artistic talent, but we were worried about Lukas because, well, he just wasn't interested in anything much. He claimed an interest in playing an instrument, but as we had no spare money for tuition, we hadn't been able to let him pursue that interest.

Once he got into TC (because Erik was already there), we had access to much more afford tuition, and Lukas started learning to play the bass guitar. Unfortunately, he wasn't nearly as enthusiastic in practice as he had sounded in theory. Lazy Lukas was on the scene again doing the bare minimum throughout year seven and eight.

Half way through year eight, his tutor told him that he would not recommend him for the music VET program for year nine as he wasn't showing enough dedication to his practice and that he needed to step up more. At this stage, things with Erik were deteriorating as well, and so I gave both boys quite the lecture.

Erik went from bad to worse over the next few months towards the end of the year, leading to him being denied the opportunity to do VCE subjects at the beginning of this year - leading to him moving out at Easter. Lukas, on the other hand, started to pick up his game. Slowly his GPA rose, and the reports from his music tutor came back more positive.

This year, Lukas has gone from strength to strength at school overall, but most particularly in music. He is really impressing his tutors, extending his knowledge and skills well beyond their expectations. 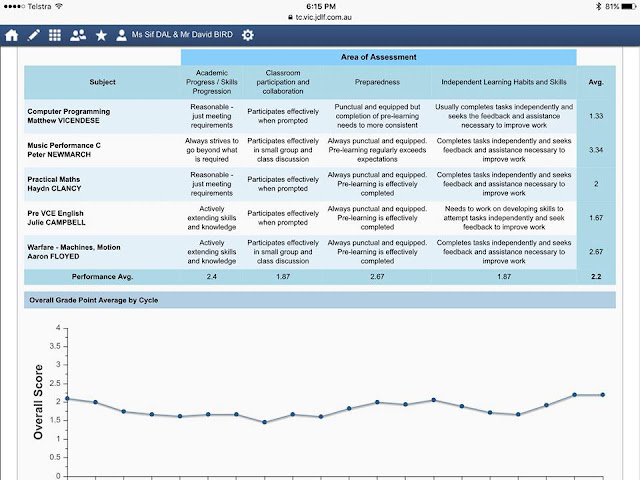 I'm so proud of him! He was a slow starter, but he really seems to have found his feet!

at June 01, 2016
Email ThisBlogThis!Share to TwitterShare to FacebookShare to Pinterest