Mine and Harlem's One Year Anniversary!

(This post was written on the 11th of January, but because Princess - that's Harlem, not me, in case you're confused - needed a toilet break, it didn't get posted until after midnight)

One year ago today, I went to the Guide Dogs Victoria campus and was shown my room and told to settle in and then come to the common room.

I remember feeling just a little disappointed that Harlem wasn't brought to my room immediately, but figured it would be soon. That was at 9am.

During the morning I and five other new guide dog handlers listened to talks about the history of guide dogs, how to care for a guide dog, how the pet insurance we were given would work, and how to monitor our dogs for health and wellbeing.

Then we had lunch.

After lunch we did some training with our instructors on how to use the harness, and what basic commands we'd need up front - and how to give those commands (it's definitely not as simple as saying, 'Take me to the shops.'

All of this was done with the instructors holding the harness and walking in front of us. They showed us the right positioning in relation to our guides when walking and when standing still.

But no dogs were to be seen.

Then we sat in the common room again. By now we were all getting a bit antsy, and so after a talk about public behaviour and how to handle people who wanted to pet or otherwise distract our guide, the instructor asked, 'Any more questions?' and one of the other students asked what was on all of our minds, 'Are we ever going to meet our dogs?'

The instructor smiled and said it was finally time and that we should go to our rooms and wait for our dogs to be brought to us, and then we'd have fifteen minutes in our rooms alone with them before any more training happened.

Lord that wait was long! I remember sitting on the bed, then getting up and checking my hair - because, you know, the dog might want a respectable looking owner. Then trying to be casual and sitting at my desk checking Facebook, and finally sitting on my bed again, waiting, waiting.

Then there was a knock on the door and my trainer, Luca, asked if it was okay to come in. I wanted to yell, 'Of course it is, bring him in NOW, put me out of my misery, I've been waiting seven months already, hurry it up!' But I couldn't because we'd been instructed to be very calm when the dogs came in and let them approach us.

Luca opened the door and Harlem all but lunged at me. I soon learned this is how he greets everyone, whether he knows them or not - he is a very social dog and I've yet to see a person he doesn't like!

We were given our 15 minutes together and he sniffed around the room, while I sat on the bed, then came to me. Then he went to the bedroom door and sniffed at the bottom of the door and started whining. I was a bit unsure at this point, maybe he didn't like me?

This is also part of his personality. He becomes very attached to his carer. He was extremely attached to Luca and didn't like being separated from him at all. For our entire three weeks together he remained focused on Luca, and it worried me. I really had nothing to worry about, though. 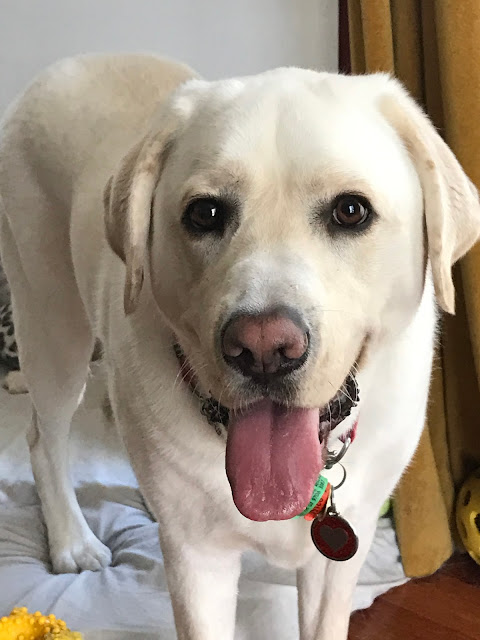 Over the next three weeks we spent every moment together, except on weekends. The first weekend it was hard to leave him. On the second weekend, I was holding back tears as we left. On the third weekend he came home with me to stay forever. The best way I can describe my feelings that day is that it was as close to bringing home each of my boys for the first time as it could possibly be.

That day was the 29th of January, but I still consider this day to by our first anniversary because a year ago today we started our guide-and-handler relationship and team work.

To celebrate today, we went for one of our most familiar walks to the local shopping centre. On the way he led me around a car parked across the footpath, and safely back off the road onto the footpath. He took me to the curb of each street I needed to cross and when it was necessary, he targeted the pole for the lights. He targeted the library doors and the empty seat at the information desk. He led me around the higgledy-piggledy book shelves, and then took me out and found the foot path again. He found the entrance to the shopping centre, and Maccas where Bryn and I bought drinks. Then he targeted an empty table and chairs for us. Finally, he took me home again. We work like a well oiled machine now. 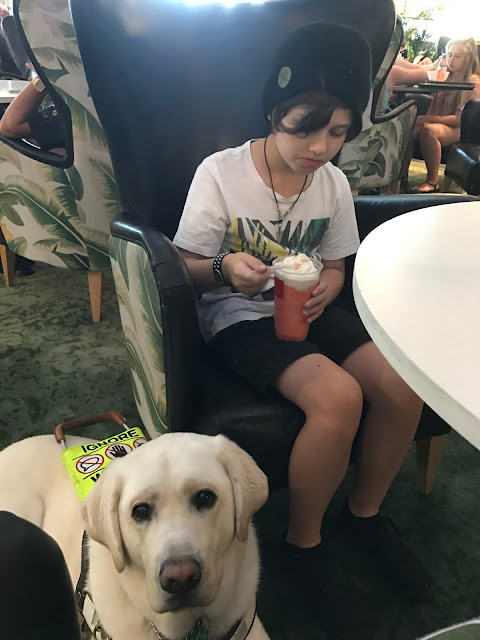 Harlem is also my companion. I suffer from agoraphobia, which is vision related, and he has supported me when out and about, making sure I don't walk into people which is one of my greatest fears. Unlike a cane which will tell you there is an obstruction in front by making contact with it - whether it's a chair, or another person - Harlem makes sure I sail right past obstacles. No more tripping people over with the cane!

He, like all loyal pets, is sensitive to my emotions and will come to comfort me if I'm not feeling well, and share my excitement when I'm feeling great! 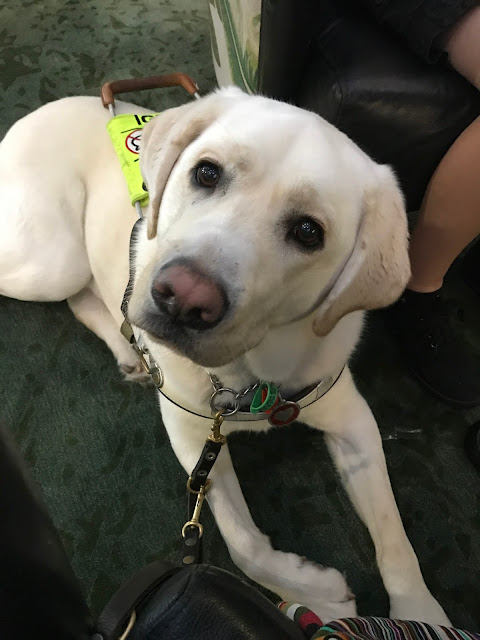 He comes with me everywhere. We've seen a few movies together. If he likes a movie - he liked Rogue One - he'll stick his nose between the seats in front of me and watch it with me. If he's not impress - ahem, The Girl on the Train - he'll go to sleep. 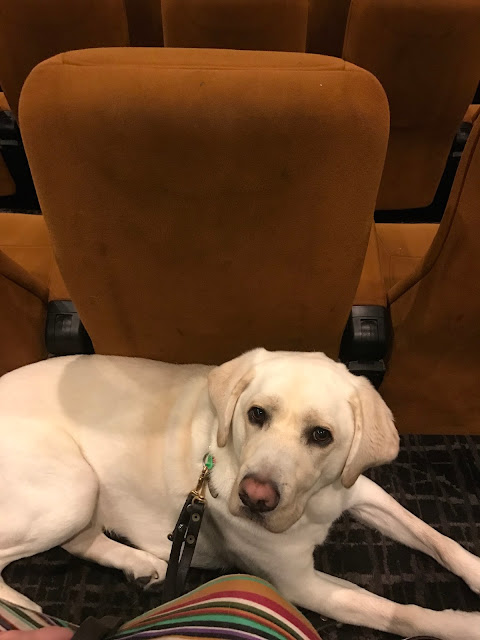 Harlem loves his work and whines if he thinks I'm going out without him - this happened a few times when he was recovery from surgery in August/September/October. He gets very excited when the brush and cloth come out because it means going to work.

For about four months in the past twelve months, he wasn't able to work due to injury and surgery. Boy did we both know it. I pretty much didn't leave the house until the last three weeks of his recovery and I loathed using the cane, so only went out with other people who I could use as sighted guide (people with vision who basically do the job of the guide dog). But we survived and have been working together for the past three months now. 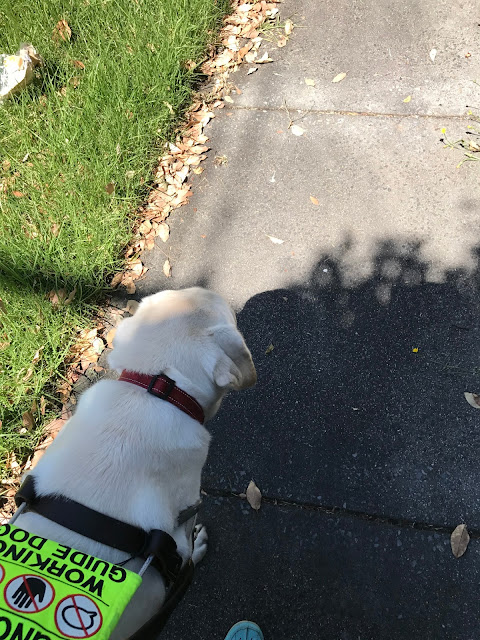 When Harlem was recovering, it looked like he might not be able to work anymore and that I might need to get another guide. While we've long since decided he would spend his retirement with us, we were all sad for him that he might not be able to work anymore because he loves working so much. For now though, he is fine. When the other leg goes as well- there is a 95% chance it will - , he will probably need to retire so we're hoping that doesn't happen for a few years yet.

Let me tell you a little about who Harlem is.

~ He is loyal (all dogs are, given the opportunity), which means if I go into another room and he can't come with him, he'll lie down in front of the door waiting for me to come back out.
~ He is a guts. When it's breakfast time, he'll start begging and drooling. If I'm sitting down, he'll sit in front of me, as if to attention, and if I ignore him, he'll shift his weight as if to say, 'Notice me!" but he'll never break contact with me and if I look up, he'll be right there waiting to catch my eye. He never tries to lunge at the food and eat it as soon as it's in the bowl, he'll sit still as a statue waiting for me to give him the command to 'Go!' One time, I got distracted while putting the measuring cup away, and I left the kitchen with our giving him the command. A couple of minutes passed before I came back, and he was still sitting there waiting for the command to eat. He wolfs his food down in 10 seconds flat - I've timed him.

~ He dreams every evening, and he runs and barks in his dreams. For many months that was the only time we heard him barked, and it was a muted 'bubble' bark, which sounds like cartoon bubbles popping. Finally, one day he barked at something and it took us all by surprise because it was such a deep, solid bark. He is not a barker.

~ He grumbles when he doesn't get his way. That is, he actually mutters under his breath in a disgruntled manner. It makes us all laugh, and I usually say, 'Now, don't you take that tone with me, mister.'

~ He vomits at a drop of a hat! This dog vomits on average once a week - usually from anticipating dinner. He can start licking his lips up to an hour and a half before dinner, and that is never a good sign. We tell him to stop licking, and often he will stop, but sometimes it's just too late, and he'll eventually start heaving and then he'll vomit. He does it at home, and he does it when we're out if it's close to dinner time. Even the trainers are perplexed about this idiosyncrasy.

~ He loves his plushies, and never rips them apart. He snuggles up to them every night, and is a cute as can be. We have many photos of him hugging his panda bear.

~ His all time favourite treats are carrots - which we have given the covert name of, 'Orange sticks of joy' so he won't get too excited when they come out. He can't hear the difference between 'carrot' and 'cat', so we ask him if he wants' a 'cat' - which we think is hilarious, but might one day get us all into a lot of trouble. 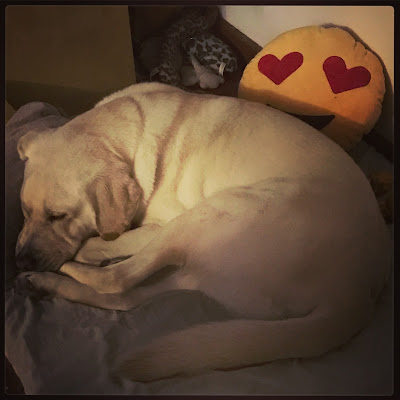 at January 12, 2017
Email ThisBlogThis!Share to TwitterShare to FacebookShare to Pinterest

He is so Beautiful Sir :) - we have a 2 yr old chocolate Lab, River.. and she exhibits many of the traits you describe in Harlem.... i only wish she was as well trained as that puppy side wins out so often....couldn't part with her ever though : )

COngrats on one year together, may you have many more (retired or not).