Mine is catching dog vomit.

When I was in training with Harlem last January one of our group's instructors told us a story about a guide dog handler in Melbourne who expertly caught her dog's vomit in a toileting bag in the back seat of a cab. She was on her way somewhere (obviously), when suddenly her dog started heaving. Somehow, through her panic not to have her guide throw up in the back of the cab (cab drivers can be very touchy about dogs in their cabs at the best of times), she whipped out a toileting bag and placed it over her dog's snout - much like a feeding bag for a horse.

At the time, I remember being very impressed by the story of this handler's lateral thinking skills.

A few months later I found myself sitting in a carpeted coffee shop in the CBD, when Harlem started heaving. He is prone to doing this in the late afternoon because he starts anticipating dinner about 1.5-2 hours before he is due to be fed and he hyper-salivates at the thought of filling his belly. Sometimes we can stem the flow of impending up-chuck by telling him not to lick (as in lick his lips). But sometimes that doesn't work so well.

So, here I was in Gloria Jean's and Harlem was making those familiar wobble-board noises with his stomach. The image of the handler in the back of the cab came to me, and I grabbed a plastic toileting bag from my handbag and shoved it over his snout just in time to catch the offending liquid.

Oh, the excitement! I looked around to see if anyone had witnessed my amazing feat of resourcefulness, but to my disappointment, people were sipping coffees and chatting, oblivious to the miracle which had just taken place. 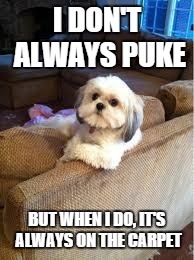 A month or so ago, I had the opportunity to tell my instructor about this, which amused him greatly. I was only the second person he'd heard of doing this.

Last Thursday, I went to Young and Jackson's (pub) in the CBD with a handler friend of mine. We ended up in the second floor lounge having been drenched by a storm up on the rooftop balcony. not long after ordering drinks, Harlem started making that familiar and dreadful sound. Once again I managed to save the day before he decorated the carper (what is it with him and carpets?). This time I was appropriately (!) acknowledged and congratulated by a couple of guys at the next table - they'd never seen anyone do that, they said.

Today, we took Ari to see his paed. It was late in the afternoon, and the paed's office had carpet. You see where I'm going with this, right? By now, of course, I've become a dab hand at averting the Pavlovian catastrophe with a handy plastic toileting. The paed. hovered somewhere between impressed and kind of grossed out, I think. At least his carpet was saved from Gastric Dressing a la Harlem.

Cool, hey? I'm the Canine Vom Whisperer. I wonder if that's a valid CV entry?
at January 04, 2017
Email ThisBlogThis!Share to TwitterShare to FacebookShare to Pinterest