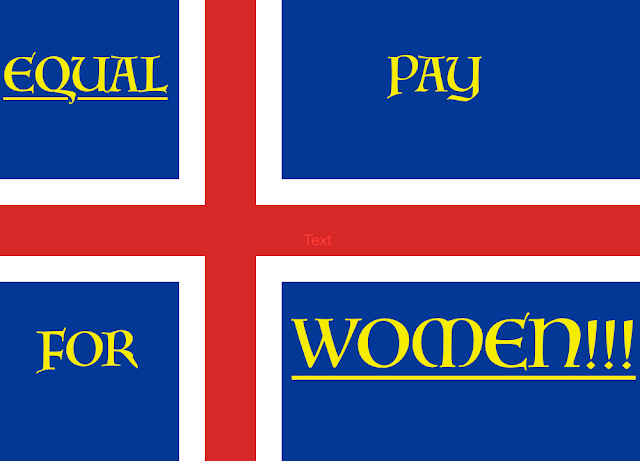 Unless you were on some sort of transcendental journey of self-exploration or on a technology free kick - and seriously, who has time for either of those these days? - you wouldn't have missed the fact that a couple of days ago was International Women's Day. This is a day which had to be created so great swaths of women could be treated on equal footing with men around the world. Now, I don't subscribe to the 'every woman is oppressed by the patriarchy' point of view. I believe if you don't actually feel oppressed, then you aren't, and that no one else has the right to insist that you are, only because they themselves feel disempowered. I see many empowered women in cultures which might otherwise be considered by outsiders to be oppressive, but in many ways are less oppressive than far more prosperous or educated populations (assuming prosperity is about money and education is about literacy and numeracy).

On International Women's Day in Australia, there erupted quite a debate about women's equal rights. Unfortunately, it seemed mostly in relation to the validity of spending thousands of dollars on swapping pedestrian lights which feature a figurine with a head, arms, and legs with a figure featuring a torso shape which might indicate a dress - you know, representing women. Mind you, some suggest it could be the cape of a caped crusader, or a man in a kilt, or a person of any sex in a lab coat.

Now setting aside the stereotyping of women wearing dresses rather than pants, we have to ask ourselves, was this money well spent? I mean, is this really going to help women attain equality? Or even help them rise above current, truly oppressive circumstances such as domestic abuse or homelessness. Is a woman living on the streets of Melbourne who doesn't have the money to supply herself with tampons at the beginning of every cycle really going to feel understood or supported. As she sits on the footpath outside of a train station, sheltering from blistering heat, or freezing rain is she really going to feel comforted by the sight of little green ladies telling people when it's safe to cross the road?

No, I doubt very much that she will.

So, who does feel comforted by this street light revolution?

I'm glad you asked! I'll tell you who feels comforted by this. Middle class, financially secure do-gooders with too much time on their hands. Wannabe cerebral warriors. People who have never actually spent any time with homeless women or women living under imminent threat to their own lives or those of their children. That's who. They like to think of these 'victories' as 'the first baby steps towards equality', but what this actually represents is the lack of will to really step outside their comfort zone.

There is always a lot of celebration of women who achieved great things in history on International Women's Day. The suffragette movement is always up there. Few people really consider what that movement really was about. Yes, it was about getting the vote for women, but why did they want the vote in the first place? Well, it was because they were sick to death of watching their fathers, husbands, brothers, and sons go off to war and be killed. They were sick of losing their loved ones and they wanted a voice to ensure that didn't keep happening. And what were they willing to do to gain that voice? Well, anything, actually. They were literally willing to die, themselves.

Let's talk about the women who featured in the Civil Rights movement in the US? Rosa Parks who, one day. decided she no longer wanted to sit at the back of the bus. Or the little girl who was the first black student in an all white primary school and had to be escorted by security guards through crowds of aggressive and derogatory parents - her name was Ruby Bridges. These were women and girls willing to risk their very lives. Not just sit back congratulating themselves for changing ten street lights.

Many Australians were unimpressed by the 'grand feat' of changing a few street lights to the tune of thousands of dollars. Quite frankly, Rosie Batty did more than that for women in Australia, just by talking, out loud, in public, without the safety of crowds and without placards.

Below is a link to an article which pretty much slams the excitement over little green lady figures for drawing attention away from a very important and revealing result of a survey about the perception of women by Australians. It is very depressing, but certainly, an attitude which will not be changed by ten street lights featuring 'women'

The Junkee article highlighting the inanity of the green lady pedestrian light changes in Melbourne in the light of a study released the same day about seriously scary stats on Australian attitudes towards women, which was overshadowed by the green lady debacle. This is the part I want you to note:

Yesterday, the same day the traffic light initiative was announced, polling firm Ipsos released their findings from an international survey of 18,000 people’s attitudes to gender equality in 24 countries around the world. They found that two in 10 Australian respondents believe men are “more capable of working, earning money, being educated and teaching than women” and, more frightening, one in seven Australian respondents agreed with the statement “women are inferior to men”.

Hello! This should have been the leading discussion all over social media and the news. This is something people need to be talking about and doing something about. And no, I really don't believe this is caused by the 'unconscious bias' male crossing light figures may or may not create.

Another article with examples of the Australian public being completely underwhelmed by this tokenistic gesture. At least some Australians believe there are far greater immediate matters of concern.

More than anything the green lady 'achievement' only serves to trivialise inequality experienced by many women. It's like, 'Oh, we have green lady lights, now. That'll keep people happy for another year, and also, they'll like us more.'

Gosh, I'm bursting with pride to be able to call myself Icelandic. I woke my sons up this morning and told each of them in turn, 'Today you can be proud to be an Icelander, because today Icelanders came together to make sure everyone in their country gets equal pay!'

Okay, so the boys might need a few years to understand the significance of that accomplishment, but one day, they may also take for granted that no wage gap is acceptable.

So, green ladies or pay equality for women... It's a hard one, I know... They're both such amazing signs of progress, hey?

To all the Australians who are demanding MORE than just a few little green ladies. To the Australians who want equal participation in parliament, more money for the homeless, or better direct (not subtle, subconscious, let's hope people get the gist) language about the equality of all the sexes, races, abilities.. GO YOU!!!

To those who think little green ladies are just peachy keen... Grow a brain... Or maybe, go talk to a homeless woman and find out what she really needs.
at March 11, 2017
Email ThisBlogThis!Share to TwitterShare to FacebookShare to Pinterest