I am known to be an avid declutterer. Dave literally lives in fear of me saying the words, 'I'm going to get a skip.' He has learned though, that resistance is futile. Starting at the beginning of last year, I've slowly been decluttering the house. There was a pretty big purge last January which involved going through the cupboards being what I called at the time 'ruthless'. However, in the past few months, I've come to realise I really did hang onto a lot of stuff that we don't ever use.

I adopted the Konmari approach to organising some things - mostly my clothes - and that has stuck. I get a lot of pleasure out of folding clothes, anyway, but doing it Konmari style and being able to easily see and access my clothes is very rewarding for me. I've overhauled my wardrobe in the last year as finances would allow and now 90% of it is monochrome, everything worn outside the house is grey or white now - except one jumper which is red, one cardijacket which is red, and one velour skirt which is a dark maroon. Actually, I do have a couple of tan pants and a mocha skirt, but these would be considered neutral as well. Partly, I've done this because Harlem is white and sheds A LOT. Partly, I do this because I wear colourful scarves on my head, and I'm not a big fan of colour or pattern clash - they overstimulate me and cause me to feel anxious (yes, really).

This last summer, we decluttered some furniture, and it felt great. We had more room in the house, and felt like we could breathe. Now, we have a list of more large pieces of furniture we want to sell or give away. This serves two purposes. The first is simply to simplify the house and give us more space to live and think. The second is that it means less to move when we move next, so moving won't take as much time, which means we'll save some money in the long run.

In this next purge I want to pare back the things we don't use or love. Part of this is going to be paring back the crockery and cutlery, the utensils etc. Things like having two coffee machines, two Sodastream machines. We have far too many plates, cups, glasses and utensils and from this arises massive amounts of dishwashing. We don't have a dishwasher other than Dave. The boys help under sufferance - I realise they should help more around the house, and I'm fully able to put the hard word on them, but I've often not been here and with the new job (I still love saying this), I won't be home for so much of the day. Dave really struggles to push the boys, he finds it mentally and emotionally draining - it is simply easier for him to do it himself.

However, everyone in the house is guilty of just reaching for a clean glass, plate etc. without even considering actually washing one for themselves - which just puts more strain on Dave. So, out they go, we'll keep everything to a set of 6 (yes, there are five of us in the house, but I'm not ready to let go of the fact that Erik *should* be here, too). Plastics will be pared down. Things we don't use such as platters, placemats, excess baking tins will be out of the house one way or another as well.

Once there is a proper wage coming into the house, I'll be turfing all our threadbare (often holey - is that how you spell the word that doesn't have a spiritual connotation?) or dirty looking (even though everything in the linen closet is perfectly clean). I'll be replacing it all with new, good quality, stuff. I really look forward to storing all the bedding in complete sets within their own pillow cases - I'm very sad, I know. Tea towels that don't look a hundred years old? Bloody awesome!

I have plans to get the boys on board by giving them money for each item they purge (that isn't a necessity, or that they really do identify as something not worth the money to get rid of). Luey really doesn't have a lot anyway, he basically only keeps the stuff he really likes. Dave won't be getting paid - poor Dave - but again, he doesn't have a lot. He tends to hoard papers and boxes, and that sort of thing isn't too hard to get him to get rid of with some carefully worded encouragement.

The decluttering is not only of tangible things. My inbox is now completely clear. My phone messages and sms' are on their way to being sorted, with contacts being created for the numbers I don't recognise so I can actually recognise them when they call.

Things that need to go are going to be stored in the garage and then shipped off to be recycled, donated, or sold. Whatever is still sitting there come the June/July holidays (or even earlier if I really get sick of looking at it all) will be going into a skip.

I'm really excited about this - yeah, that won't surprise anyone. I have myself a chart for rewarding myself (though, honestly, this is quite easy for me, I don't need rewards), and to track how much stuff I'm actually getting rid off is helpful so I can see I'm getting through the crap. I'm always interested in the numbers and the progress of projects, so having the chart will be reward in itself. Below you can see the second page of the chart - saving it from .pdf to .jpeg went straight to the second page and I can't be bothered fixing it just to show an example of the chart. So, basically, for every item (which can be every plate or a set of crockery, it's completely up to your), you put a X in a box (or you can colour the box in, if you are so inclined). 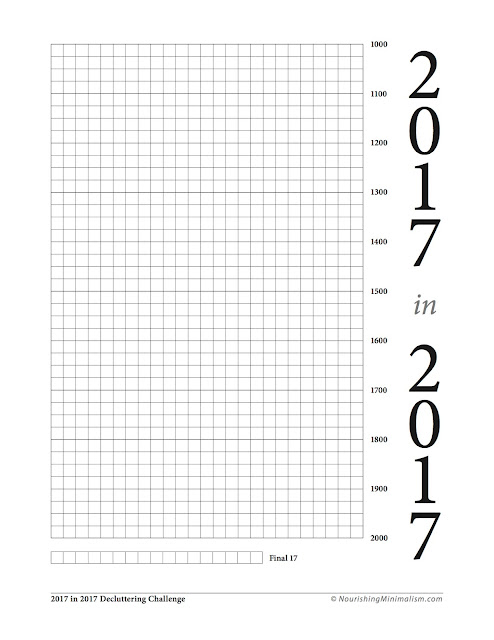 The final, and most important, step of this decluttering project will be to not replace all the clutter with new clutter. I've read that this is best done by not bringing stuff into the house before really having a think about whether or not the item serves you. Do you need this item? Do you love this item?

I would probably add, do you think you'll need this item regularly, or do you think you'll love this item next week, next year, etc. Is this item something you'll use once in a while, and that you could borrow from someone for that occasion. I have a whole bunch of wine glasses but we only really use two in this house, we rarely entertain and then we usually entertain people who don't drink alcohol anyway. So, do I need a dozen wine glasses? Reducing clutter should reduce impulse buying. It should reduce the mindset that you have to have something because everyone else has it.

I'll keep you all update on how this project plays out.

at April 16, 2017
Email ThisBlogThis!Share to TwitterShare to FacebookShare to Pinterest