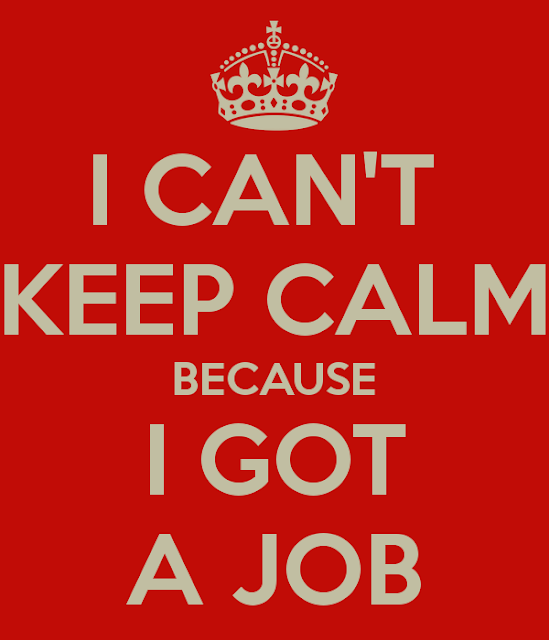 I had gotten to the point where I had given up on ever having a job. I thought it was just the end of the line for me as far as working went. I was going to be part of the large percentage of people with blindness or low vision who just weren't able to gain employment. Turns out I was wrong. Thank goodness!

Yup, never thought I'd ever be writing those words. I have done a degree in communications, a degree in education, and a degree in creative writing. During those degrees I never did any kind of class in sociology. It just wasn't on my radar.

And yet, here I am with a full time job as a community services worker. It's my job to connect clients with services in the community. How on earth did this happen? Well, the story is actually quite simple. After withdrawing from the PhD my goal was to become gainfully employed. I set my deadline for the end of 2017. I was not exactly sure how I was going to go about this because I barely have any paid work history. It has always been my main obstacle.

It was the biggest disappointment I experienced with the PhD. I had believed I would get some sessional work and that would give me something to put on my resume. Despite watching every single other person in my school be given tutoring work - every single one and yet, - even though I made my interest in working clear - I was overlooked. I can't say it was because of my vision impairment, I can only say I was eminently qualified to tutor students, but was never offer a class.

So, with my goal in mind, I accepted an offer to attend a pre-employment course at Vision Australia. I felt this course might offer me the best opportunity to learn how to deal with taking Harlem into  interviews and otherwise addressing my ability to do the work even with my vision impairment. The course was great, mostly because of the people attending. They were great, funny people. We had a lot of fun. During the course we were encouraged to start looking for jobs and formulating applications. I was able to talk about what sorts of jobs I was interested in and what my qualifications were with employment consultants.  I already knew I wanted to help people. I thought I'd do this through teaching (that is part of the job I now have, it's just not the central focus), but through this course, I started to identify other possibilities.

I knew I wanted to work for Vision Australia because I have a strong desire to advocate for people who live with blindness or low vision. So, we had to do mock interview, and it was suggested to me I could do mine mock-applying for a position as coordinator of volunteers listed on the VA careers webpage. As I prepared my resume and cover letter for the position, I started to think I could actually really apply for this job. So, on the very last day for submitting applications, I handed mine in. To my surprise, I got an interview. And then I got a second interview - just me and one other person. I didn't get that position because I was more client focused than volunteer focused. However, when I got the call to let me know, I was told there was another position for a community support worker going, and even though the deadline had passed and interviews were starting the next day, they thought I might be a good candidate for the position. So, I submitted a resume and cover letter the next day. I went to an interview last Friday.

I thought I'd flubbed it because there was one question they kept coming back to and I thought maybe I just wasn't understanding what they wanted to hear.

On Monday morning I received the call, and an offer to take on this position. I was told my application had been exceptional. I was stunned. Two job applications and getting to the second interview for the first, and being asked to apply for the second. If you'd told me I'd have a job in welfare a month ago, let alone any job at all, I'd have told you you were nuts.

2017 has been an amazing year for me so far! I'm getting my book published and launched (looks like May at this point). Harlem is all better. I'm not feeling all the stress I had last year. And now I have a honest to goodness real job, which means we'll drag ourselves up over the poverty line for the first time ever for this family!

I'm obviously extremely excited, but also really scared. I've never had a real grow-up job. I'll have responsibilities. I'll have projects to manage. Files to manage. Clients. I'll have a station and colleagues, and super, and a wage. An actual wage, consistently, every fortnight, an income I can count on.

Even more amazing, I'll have a job to put on my resume. A job that shows I have worked in a role with a lot of responsibility and autonomy.

You know what makes me laugh? I didn't need the PhD to get this job. I didn't need the Masters in Writing or Education. The biggest part of my success came from the work I did with Alternative Baby. All the volunteering, running playgroups, moderating the forums, being president of the committee. As well as this, the role of secretary for the (so called) Mature Age Student Club at Deakin. These volunteer roles gave me so much experience in community service, that they actually carried more weight in my application and gave me an ocean of anecdotal evidence from which to draw answers to the 'tell me time when...' interview questions.

All the qualifications I kept chasing, trying to make myself 'worthy' of a job, and in the end, they counted for not much at all. These people would not have cared that I had Dr in front of my name - contrary to what the head of school tried to convince me of at the end of January, and just like that our family lives are transformed.

I start on Wednesday the 26th, which seems like ages away, but it'll be upon me before I know it. One of the best things about this job is that I already know a bunch people I'll be working with, and the office is familiar to me. More than that though, I'm getting to work at an organisation I wholly believe in. I get to make a measurable, positive difference in people's lives.

And, this position is full time! That is a rare thing to have in this day and age!

So, there you go. I'm a community support worker, a role I never even considered. Wish me luck!
at April 12, 2017
Email ThisBlogThis!Share to TwitterShare to FacebookShare to Pinterest