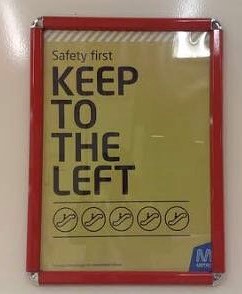 My main source of transport is public transport. Sure, Dave has a license now, and we have a relatively new and reliable car, but Dave can't drive me to work or home again.

So, I take two trains and a bus twice a day. Some days I also travel elsewhere for work and then it is more trains and more buses, and what I simply cannot wrap my brain around is the lack of courtesy of some commuters.

For the most part public transport commuters tend to cooperate with each other, understanding that the smooth flow of travel requires people to be considerate and courteous. Others either don't travel by public transport very often or simply don't give a shit.

Two things, in particular, annoy me - 'annoy' is likely an understatement as I far too often consider homicide. The first is people who choose to stand right at the card scanner before retrieving their card from their bag - mostly this is women, but sometimes men.

Seriously? You can't think ahead? I know 7.20am is not a great time for clear thinking but one would at least consider sheer self-preservation would motivate you to not create a traffic jam at the turnstalls. If I thought Harlem would do it, I'd sick him on these public transport transgressors. Can't they tell people running for a train do not appreciate being made to come to a screeching halt as they are trying to get through the gate? I'm about ready to start screaming, 'MOVE!' at them, but I'm too courteous.

In a similar strain, people who stand on the wrong side of the escalator - particularly when they have NO ONE to the left of them. This is how it works people; if you aren't walking or, even better, running up or down the stairs, then stand on the left hand side and let other commuters pass you! If I can line up behind my dog so other commuters can pass us, then you can move your lazy arse into that empty space next to you. And if there isn't an empty spot next to you, then move up the escalator until you find an empty spot you inconsiderate, self-important nut-job!

Honestly, people need to watch out when I'm going up or down those escalators because I'm legally blind and I'm likely to walk right into you and either ram your arse with the top of my head (thank goodness for headscarves!), or push you down the stairs ahead of me.

So, if you travel on public transport, either occasionally, or all the time, watch the majority of the people around you and mimic their considerate behaviour, it really isn't that hard and it could save your life!
at September 14, 2017
Email ThisBlogThis!Share to TwitterShare to FacebookShare to Pinterest