On the train this morning I overheard a conversation between two men, it went something like this...

Man 1: Yeah, so my son needs a good score in Math for the course he wants to do at Uni. The thing is, math is the class he's struggling with. I'm going to have to get him a tutor.

Man 1: Absolutely. I rang the school yesterday afternoon and am expecting them to call back this morning. I'm going to tell them that I'm not impressed considering I'm spending $27 000 a year on the kid's education.

There is a misconception out in the community that private schooling guarantees a better education, or more precisely a better outcome in terms of higher scores for getting into the best course of choice at University. 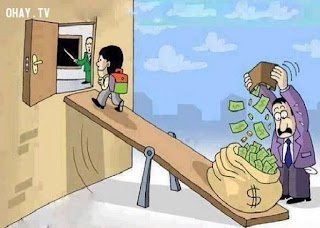 Private schools market themselves on the scores of their students and their ranking on sites like the 'My School' site, but what they don't tell parents is that they often poach the highest achieving students from public schools to increase their scores, luring them with scholarship, They have waiting lists and pre-entry testing which allows them to cherry pick the highest scoring students even before their parents fork out tens of thousands of dollars every year for their child to be able to ride ponies as an elective choice, or swim in the school pool, or use the most up to date technology, or make important connections in society.

So, parents believe they can send their child to these schools and BECAUSE they pay exorbitant fees, the school will magically transform their child into an overachiever.

If the child doesn't have the aptitude, or more importantly the thirst for knowledge in all areas of their education, they are bound to do well in some subjects and not as well in others. As the old adage goes, 'Everyone is a genius, but if you judge a fish by its ability to climb a tree, it will live its whole life believing it is stupid". Not everyone can climb the tree, not everyone will do well in math - no matter how much you pay.

Of course, the opposite is also true. Just because your child goes to a public school, and you only pay a couple of thousand a year, does not mean your child will not be able to become whatever it is they choose to be. If your child isn't doing well in a subject at school, it's not because you didn't pay enough money. Money does not buy ability, and even the very best teachers will struggle, and often falter, in their quest to coax an unable to unwilling student to excel at a subject.

That dad can bluster at the school as much as he wants today, but it is probably pointless. If his child really wants to get into that course, the child will have to put in the extra effort himself. By taking the stance that the school should be responsible for the child scoring enough sends the child the message that it is the school's fault he is not doing well. It teaches an abdication of responsibility. It might even cause the child to think they are stupid and there is no point putting extra effort into raising their own score.
at November 22, 2017
Email ThisBlogThis!Share to TwitterShare to FacebookShare to Pinterest