Went to see my ophthalmologist on Saturday. Explained how my vision seems to have deteriorated a fair bit over the past couple of years. He does what tests he can do. (there was refraction test he couldn't do because my pupils were too contracted - in a darkened room, mind you)

Anyway, he tells me there is no physical reason my vision should be deteriorating or that I would be suffering from glare.

He also tells me my measurements haven't changed since the last appointment a couple of years ago, I still have 6/120 vision.

This is the problem I always have. The structures remain the same, but the vision is still affected in the negative. This has me thinking. When I was very little I could see from both eyes, then when I was about three, they discovered I could no longer see from my left eye - I mean nothing, not even light perception - but the structures of the eye hadn't changed at all. Professor Billson - my doctor back in the day - said it was a neurological change. That my brain was getting confused by the messages and had turned of messages coming to the brain from the left eye.

What if that is happening again? What if the neurological pathways for my vision are being disrupted?

I'll put this to him when I see him again tomorrow - he has to try and do the refraction test with drops in my eyes. Yay, I get to apply for leave again (she said, dripping with sarcasm).
at April 30, 2018 No comments:
Email ThisBlogThis!Share to TwitterShare to FacebookShare to Pinterest

So, I just realised my last two posts were pretty much about the same thing. It was one of those, 'Tell me if I've told you this one...' moments. Break out the Zimmer frame and tea cosies. But seriously, I need to check what I wrote about last before starting a new post.

I was at our main office on Tuesday. That place is so pretty now that it has been renovated. I'd love to work from there (also, it's a lot closer to home). Anyway, I ran into our General Manager - she is such a lovely person, and I'm not just saying that because she's my boss' boss.

Being the person I am, of course, I'm not at all intimidated by authority (maybe I should be). I will speak to our CEO just as casually as I do the colleagues in my pod (okay, I wouldn't tell him what my kids did over the weekend, but you know what I mean). Because of this, I think the higher ups feel comfortable around me, just as I do around them. I kind of helps that half the time I don't even know who I'm talking to unless I see them all the time.

So, anyway, I ran to our General Manager and we got to chatting, she was showing me where the kitchen was on the floor we were on and at the same time asked how the promotion of my book was going.

It was funny, really, that we were having a casual chat and both the regional managers in my office (my boss and the boss of the other team) ran into us and were quite surprised to find me chatting away. I had been talking to both the day before and both had told me (separately) to speak to the General Manager about the issues I was talking to them about. Now, when I was chatting with the General Manager, I didn't bring up either of those issues, but I could tell they both were a bit nervous that the very next day they ran into me chatting with this woman on a site I don't actually work on. It was amusing. Like maybe I had tracked her down to talk to her.

If I leave this workplace, I'll really miss a lot of people. It's funny how you build up relationships with people. I don't socialise with any of my colleagues outside of work (let's face it my social life is pretty much non-existent at the moment), I have a few of them on Facebook, but that is about it. That said, there is this level of workplace mateship, and I'll miss that. Even with the General Manager who shows an interest in my book - thank god my geriatric brain manages to remember her name, even though I can't remember what I blogged about a few days ago...

Now, where did I put that tea cosy?
at April 27, 2018 No comments:
Email ThisBlogThis!Share to TwitterShare to FacebookShare to Pinterest

You know how I said it looked like I'd secured my position here? Yes, well maybe not so much. About ten days ago, I was called into my manager's office and told that they were having to economise (and I know why, so that wasn't just a story), and my job was one under review. Of course, I freaked (not in the office), because, well who wants to be looking for a job, like ever?

Here's the thing though, once I've sold our services, they go through the national call centre and then get processed to our office and no one actually knows where they come from. Service providers such as the OTs and the O&Ms can show their new clients, but they get them through the national call centre where no one knows where those new clients come from. See what I'm saying here?

Anyway, I arranged a meeting with my manager a week later and brought in a strategic plan I'd written up (7 pages of it), and then I asked her if my contract was being extended, which she said it was, and I asked if that would be on paper with a signature and she said it would be. Then I asked how I was supposed to measure the number of new clients I was bringing in. She said that was a hard question to answer. It is a hard question to answer, but unless it can be answered, it can't be grounds for letting me go.

Anyway, smelling the scent on the wind, I'm now looking for a new job, so if you know of anyone who is energetic, insightful, and forward thinking, pass my name on to them, would you?

Thanks!
at April 23, 2018 No comments:
Email ThisBlogThis!Share to TwitterShare to FacebookShare to Pinterest

Last Friday, I was called in to my manager's office to be told that she is having to economise (I suspect because we're about to start paying rent on two properties as we transition from one site to another - which might take a year or more). Anyway, in brief, my job is one they are considering cutting. Bugger. She says she needs more new clients, particularly from the aboriginal and culturally and linguistically diverse communities to justify keeping the position. I'm working on it, but these are challenging communities to crack, because of the cultural and linguist divides. Particularly with the Aboriginal and Torres Strait Islander populations, there is a lot of mistrust of organisations to overcome. In any case, I have to bring in results and quickly, if I want to advocate for this position.

The other thing that is a challenge is proving the numbers. We may have more clients come in, but how to I attribute them to me. How do I show that?

Oh well, I knew this was a temporary position, I was prepared for that. It's just disappointing. I'll do what I can, but I'm not holding out much hope. It's time to start considering other options.
at April 16, 2018 No comments:
Email ThisBlogThis!Share to TwitterShare to FacebookShare to Pinterest

The time has come for the next round of piercings. Now that I have longer hair and can use it to mask some new metal, I'm itching to get some more facial bling. Here is what I'm thinking about. 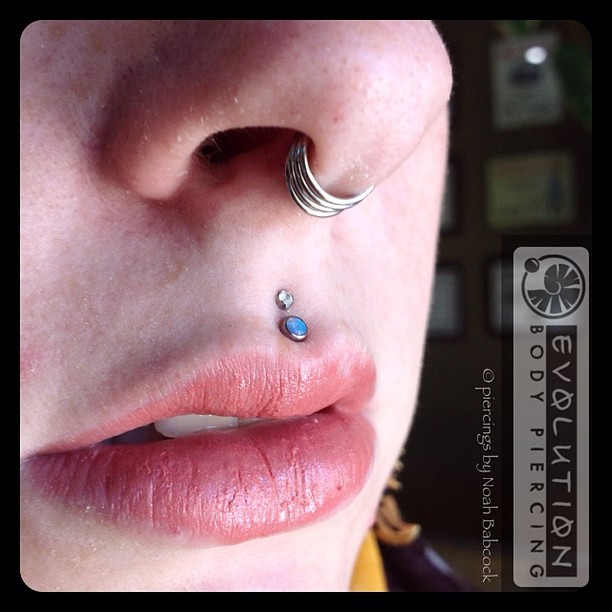 The double medusa (upper lip) because I'm not entirely happy with the position of my current medusa now that I've had it for a while. I would like it closer to my top lip - also because I'm wanting to add another piercing and it looks better with an upper lip. So, I'll get the second medusa and retire the first one. 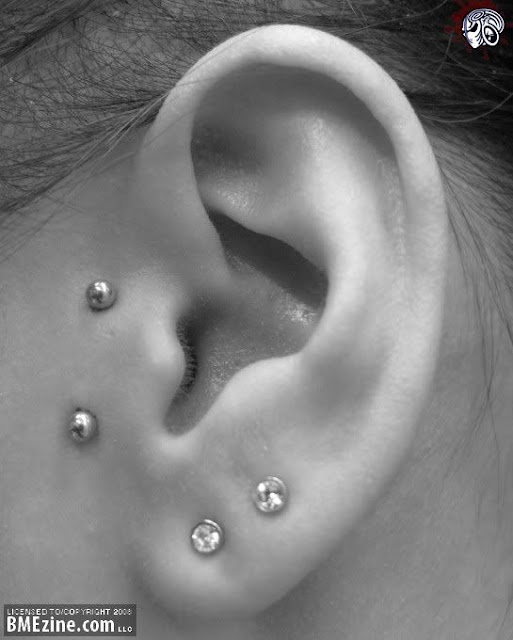 This is a forward tragus, and it is the piercing I'll be getting tomorrow. There are two kinds, one uses a piece of jewelry that looks like an upside down staple. The second uses a 'banana bar' which is a curved barbell. I would prefer the former, because I like that flat against the skin jewelry, but it requires different instruments to perform apparently. I checked with my brother and he has a banana bar above his brow (another place a staple surface can be done, and it looks okay. 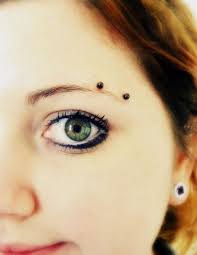 Speaking of above the brow, I like Mike's so much that this is the second piercing I'm getting (in a month to six week's time) It will be harder to disguise but not impossible. It will also use a banana bar, and eventually I'm going to put opal like balls on it. 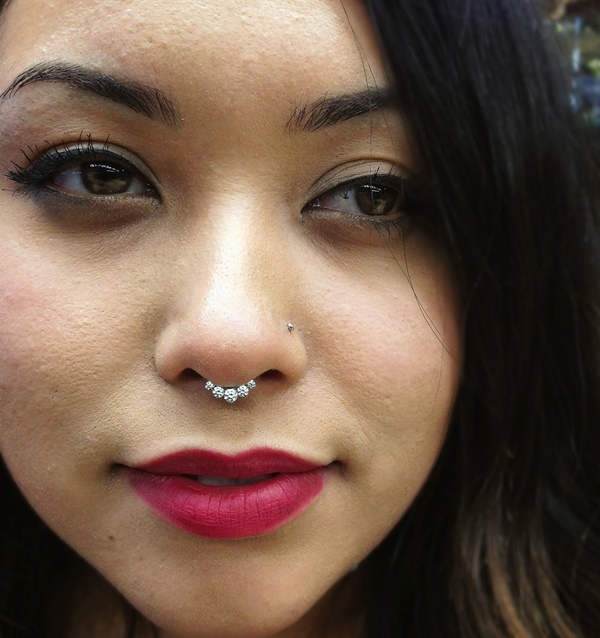 The last one I'll get (probably when I have a four week holiday, so it can heal properly), is a septum piercing. I want to be able to wear the kind of jewelry in the picture above which is why I need to move the medusa further down my philtrum. At work I'll wear a cresent bar and flip it up so it is completely hidden.

I'm pretty excited about doing these. I'd love a bottom lip piercing, which would look awesome with the lower medusa as well, but I think it will be too much for this particular workplace. It will take until Christmas to get all of these sorted. I can't wait to share the results with you guys!

at April 06, 2018 No comments:
Email ThisBlogThis!Share to TwitterShare to FacebookShare to Pinterest

I've been working at this job for almost a year. I can't believe how fast it has gone. Today, I have my individual performance meeting. These meetings are par for the course, really, they happen about six monthly, but this one is making me a bit nervous in so much as it is only three weeks until my temporary contract is up. I've talked to other people who are getting up to the same date or have passed that date already and it seems there is no contract for beyond the initial twelve months. For some reason I thought there was.

I think I'm in good stead. I think I've done a lot of good in my role. It can be slow going at times and sometimes I'm unsure as to whether I'm actively engaging the people I want to engage or promoting the organisation. I guess it's a bit of both.

Promoting the organisation is a long game and I may personally not see the results of doing this. The problem with that is not being able to show direct results from my activity. At the same time, it needs to be done, particularly in regards to connecting with younger adults and people in aboriginal and CALD (culturally and linguistically diverse) communities.

So, today I go in and talk about my strengths in relation to my work, the areas I feel I need to develop further to support my work, my aspirations, and my strategies and goals related to the work I'm currently doing and the work I'd like to do in the future (this includes how the organisation can assist me with training).

For these purposes I've learned to apply SMARTA goals (specific, measurable, achievable, realistic, timely, and, oh god, something else starting with A). I've also learned to apply the 70:20:10 measure of learning (70% role related experience, 20% other people experience, and 10% formal training). The formal training part can be a bit difficult to define, though, so I'm hoping for some guidance with that.