At the end of November a minor miracle happened here in Melbournetown. My aunty Syta came to stay for a month. This was a dream come true for us, and for her. I would never have imagined that one of mum's brothers or sisters would ever make it down to Australia, despite many plans to do so by so many of them.

Anyway, it finally happened. Although she stayed here for nearly a month, I didn't get to see her a lot because I was working and she and mum did a trip down memory lane to Sydney.

I did however get to all to myself on one Saturday and I took the opportunity to show her around a small part of Melbourne. I planned the following route for us because I wanted her to see a couple of places in Melbourne I knew she wouldn't have gotten to. 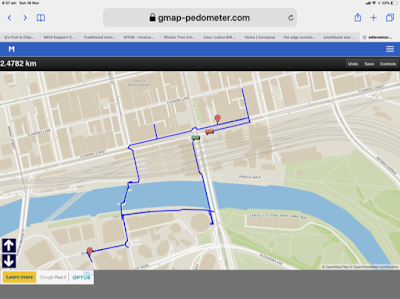 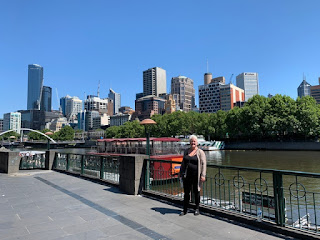 For breakfast we went to Bluetrain for real pizza and a drink (beer and Pinot Grigio). 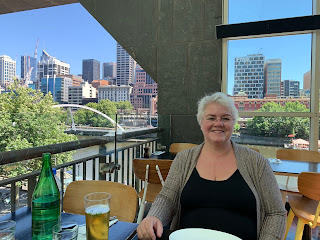 Syta isn't particularly afraid of heights, so I took her up to the 88th floor of the Eureka building and showed her the layout of Melbourne. Of course, Harlem got to see the top of Melbourne as well - he is also not bothered by heights. 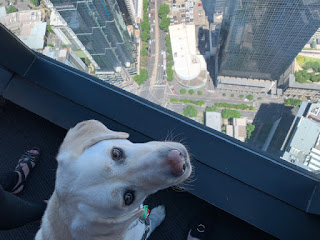 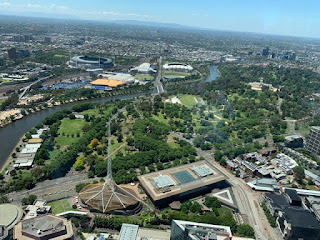 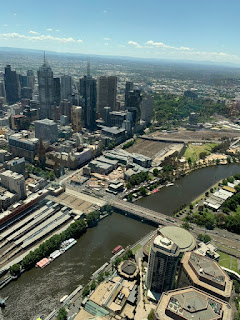 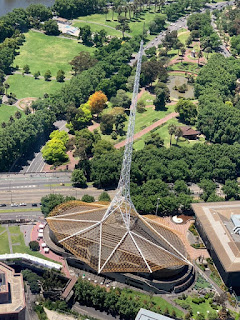 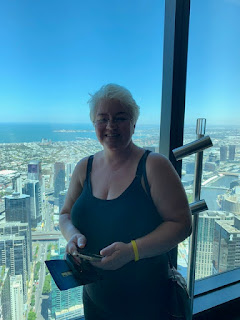 We went out on The Edge. I've done this before so I wasn't worried at all. Syta was a bit iffy about it all, but hey, it's an experience she'll never forget. We weren't able to take photos ourselves while in the box, so we took photos of other people going out on The Edge. 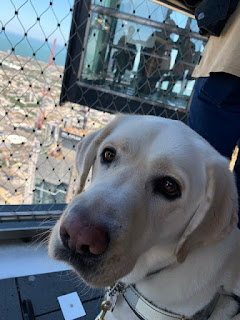 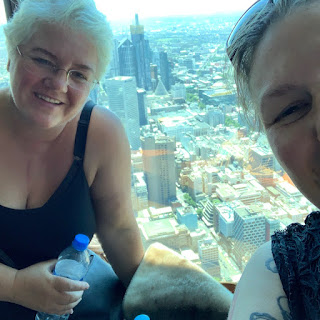 Afterwards, I took her down Degraves, which she loved. I should have taken a photo of the street long cafe, but we were so busy looking at everything that I completely forgot. 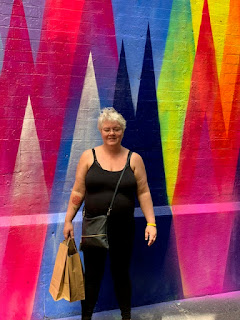 Next we visited the iconic Young and Jacksons pub. We start on the bottom floor for some live music, beer, and bourbon and coke. 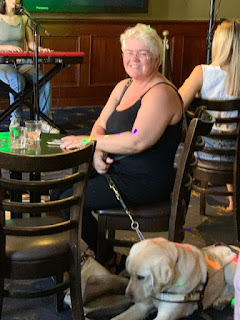 Harlem made a fun backdrop for the disco lighting... 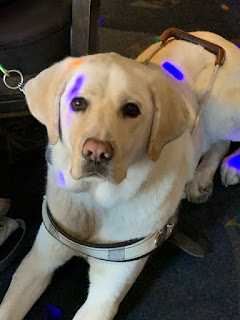 The we moved up to Chloe's bar to visit Chloe, because, let's face it, you haven't really been to Melbourne if you haven't visited Chloe. Harlem was quite a show stopper with a bunch of patron's wanting a photo of him, and even a photo with him! We also had a nice lady take a photo of us with Chloe, but I'm keeping that one for my private collection. 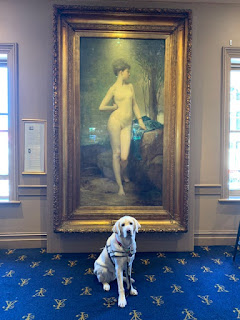 and beer and bourbon and coke... 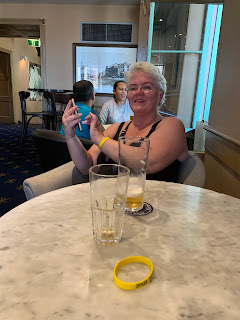 Finally, we migrated up to the Cider lounge for some gin and tonic, and Zambuca with coke.  Where we were hit on by a drunk old dude who probably thought we were dried up old singles with nothing better on offer. I sent him on his way toot sweet. 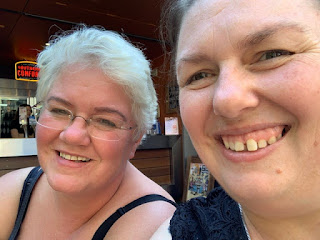 From there we went to Hosier (Hosiers?) Lane to have a look at all the graffiti. 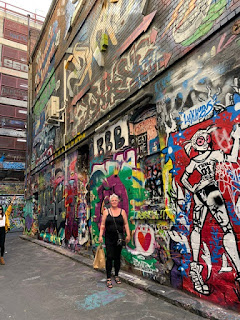 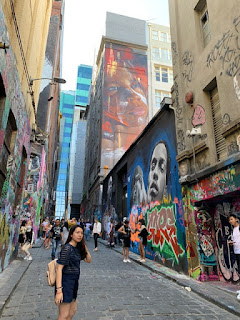 Stan Lee had passed away only a couple days earlier, and someone had been quick of the mark with a dedication. 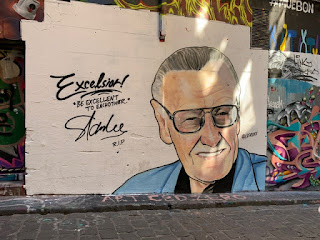 I got a pick of Syta next to a 'hole in the wall' - though actually it was a side window, probably more for ventilation that a servery, but she got the idea. 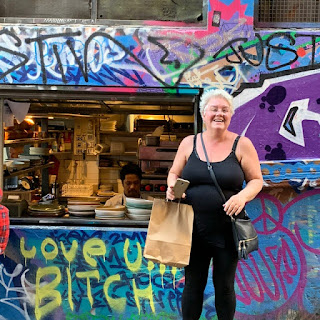 I was going to show her The Forum, but there was some concert happening at 8.30pm and goth types were already queued up around the block at 5pm.

So, we went over to Fed Square and I took her into the Bird's Nest - which is probably the only part of the Fed Square design that I appreciate. 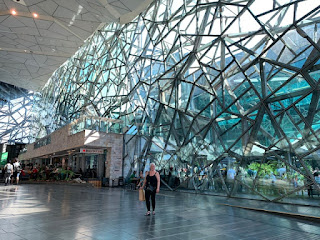 Finally, we treated ourselves to our 7th drink of the day at Time Out - a Toblerone Coctail, which consisted of Kahlua, Bailey's, Frangelico, and chocolate - oh my god, so yummy. 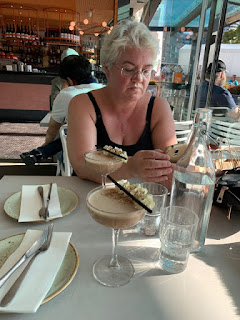 I think Syta and fun and saw a different side to Melbourne.

at January 09, 2019 No comments:
Email ThisBlogThis!Share to TwitterShare to FacebookShare to Pinterest 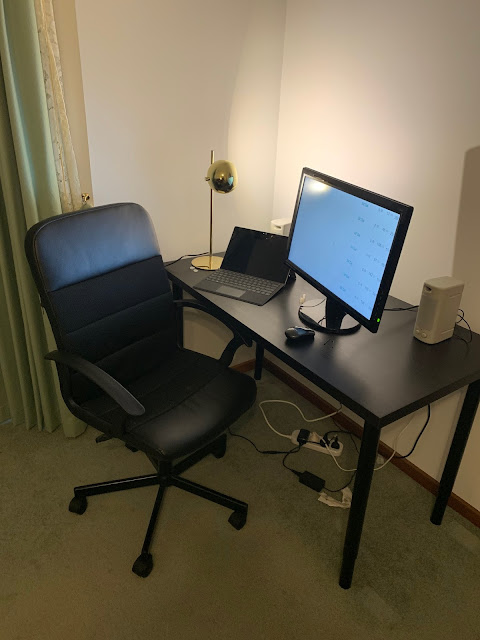 Well, I've given in.

After I did the whole decluttering, minimalist thing, I vowed I wouldn't have a home office again - we never seem to have a room we can dedicate to a quiet place to write anyway). You see, the whole minimalist thing is all about just sitting anywhere with your laptop - on the floor, on your minimalist 'mattress on palette' bed, or at your kitchen bench. That works fine if you have good vision, but when you're nearly blind, but resistant to using a screen reader program as I am (I know, I know, I need to get over myself), you really need a desk, and a chair, and speakers, and a mouse, and a lamp, and, and, and...

So, yesterday I bought a desk and a chair for $50 off the Facebook marketplace, and then took Bryn's monitor and speakers off him (he has my iMac, so he's fine), I bought a lamp (not exactly a bargain, but I really liked the look of it, and the warm light turns out to be just right for me).

I had to buy a HDMi displayport-to-mini displayport adaptor, and of course Microsoft made it so that you need a specific Microsoft adaptor for the Surface Pro (which cost more than the chair and desk). Bloody Bill Gates!

I did all of this for you, dear loyal blog reader of mine. I have missed you and I hope you have missed me. I also hope this set up means I'll have more opportunity to blog. I'll end this post here, but I will no doubt do another blog very soon because there is so much I haven't written over the last few months because it's just been too hard with no desk or large monitor.

Thanks for being patient with me.
at January 03, 2019 No comments:
Email ThisBlogThis!Share to TwitterShare to FacebookShare to Pinterest
Newer Posts Older Posts Home
Subscribe to: Posts (Atom)