I've been struggling for some time to figure out who I am in terms of style. This has been an ongoing process since I ever became aware of style, and here I am at 47 still struggle with it. I've come close at times. I know for example that I don't do well dressing like most of society. I always have to stand out - whether I really want to or not. I'm not sure why this is. I guess I'm just not into fashion as such. I've worn all sorts of things in an attempt to find myself style wise. Peasant clothing (and by that I mean actual clothing that resembles what peasants work centuries back), all monochrome, loud colours - REALLY loud designs. Lagenlook (look it up)). Just recently, I thought I'd found myself in swing tops and balloon pants. Apparently not, because I'm still looking.

Some of the changes I've made have been in pursuit of fitting in. Fitting in with my alternative friends, or in with the office environment expectation of dress. Neither suits me.

The other thing I've always tried to avoid is anything resembling brown, including oranges and warm neutrals. This stems directly from associating brown with my mother and all the furnishings of our home in the 70s. Mum told me last year that those were not her choice of colour but that having to live within the very strict confines of what my dad thought was reasonable budgeting for clothing and decorations, she had limited herself to browns to be sure her clothes always worked together.

It struck my then that the reason I had not like all the brown and orange, and had associated this with mum was that those colours were not colours that reflected her personality.

Slowly, I've reintroduced myself to oranges. I've come to terms with orange. I've come to accept that warmer colours work better on me than cooler colours - although my skin is a neutral colour. And having accepted that my base of complimentary colours sits within what would be considered an Autumn in all those colour coding systems I've also come across a system called Dressing Your Truth, which is also a colour system, but based on your personality. Like so many things I've tried before I don't know for sure that this will work either but I'm willing to give it a try. As it turns out, my personality - the drive I have to get things done, to be loud, and a bit pushy, even to walk heavily on my feet and not be the cultural definition of what is considered feminine (the reason behind changing my name from Claudette to Sif to soften the sound of my very name), is a type 3, which is a colour range that fits within the autumn palette. Though, DYT will argue that neither black nor which belong in the colour range, which some charts disagree with that argument. 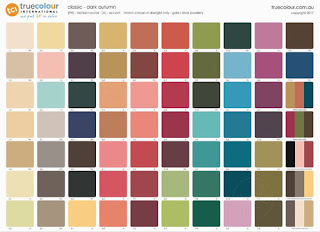 Unfortunately, with my recent attempt to fade into the background by wearing monochromes, and black and white and grey, I've just gone through my wardrobe and there isn't much left. Interestingly, the stuff I bought from Keshet, that I've been hanging onto until I lose some more weight IS within the colour range. It seems I was on the right track there. Which is good, because I felt good wearing them. I put them aside because I felt they were too loud for the office.

So, here we go again. Hopefully this time I'll get a lot closer to finding myself - at least my style - a bit quicker.
at July 28, 2019 No comments:
Email ThisBlogThis!Share to TwitterShare to FacebookShare to Pinterest
Newer Posts Older Posts Home
Subscribe to: Posts (Atom)