I was watching The Blacklist last night (yes, again), and suddenly I realised everyone seemed to live in apartment 3. True story! Red, Katarina, and Ilya all live in apartments number 3. I had to go back through season 7 and a bit of season 6 to confirm this, but I wasn't imaging it. I checked Liz's apartment door when I realised the apartment opposite her's - next door to Katarina's - was number 2 but the number on Liz's door had a rounded number so couldn't be a 1 or a 4...

I went back through several seasons and discovered that when Tom and Liz moved into their apartment (the one Liz lives in now), it was number 4a, but then later (as in season 6-7) it somehow became apartment 6...

The 3s co-incidence doesn't end at Red, Katarina's, and Ilya's doors though. The motel room where Liz confronts Red with the results of the DNA test Cooper ordered... number 3. The apartment Louis T. Steinhil - a.k.a. The Illusionist - lives in... number 3.

But those are just door numbers.

Katarina is number 3 on The Blacklist.

That's a lot of co-incidence. 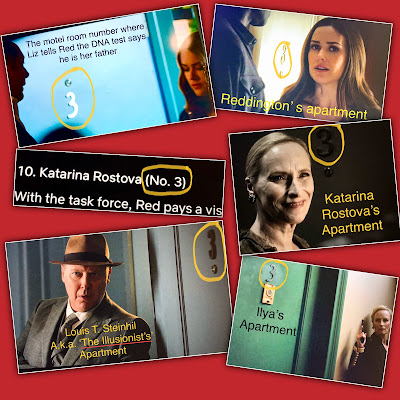 While I'm waxing lyrical about my current favourite series, I've had another theory growing in my mind.

What if Reddington, Ilya, and Constantin are all brothers? All three have been Russian agents (assuming my theory about Red being a sleeper agent who entered the naval academy as Raymond Reddington is correct. I'm still thinking Dom (rest his soul) is Reddington, Ilya, and Katarina's handler, but what if he was Constantin's as well. This theory came about because both Constantin and Katarina were Rostov's before they married. It is implied by Red when he, Dembe, Frankie, and Dom are at Dom's place that Dom is a Rostov. This happens when Red tells Frankie she has stumbled into a family feud and the Rostov family is quite eccentric. So, Dom and Katarina and Constantin are all Rostovs. I doubt very much the show runners would be going down the path of incest - god I hope not, anyway. So, then Red, Ilya, and Constantin are all Koslovs? What if, for some reason Dom took the brothers in and then trained them all along with his daughter, Katarina.

So, you might ask why Constantin would change his name? Maybe because Koslov is as common as Smith in Russia, but Rostov is a far less common name, and Constantin had his sights on a prestigious life? Maybe he wanted to turn his back on his own family for some reason (maybe they were traitors to their country, or poor, or somehow shameful to him and he wanted to distance himself?)

The three brothers all loved Katarina, which would have caused some tension. Both Constantin and Red's DNA tests were deemed to make them Liz's father, but Constantin's was much older - so, from when DNA tests weren't as sophicated as now, and then it would be conceivable that he might be mistaken for Liz's father because he and Red are brothers.

Red and Ilya speak of Ilya 'letting Red down' because Red wouldn't give Ilya's truck back when they were children. Ilya repeatedly reminds Katarina that they pledged themself to each other when they were 7. Red is also sick and could possibly have the same sickness as Constantin because Katarina is relieved that the illness Constantin has is only passed from father to son - she would be relieved if she knew either Constantin or Red were Liz's father. If you're wondering why Red would suggest Crisper as a cure for Constantin but still be looking for a cure for him, then maybe Red tried Crisper but it didn't work for him.

Dom tells Red, after Red finds out Liz turned him in and landed him on death row, that he (Dom) forgave Katarina because she was his child. Red reacts badly to this and starts to walk away. Dom asks him where/why he is going and Red replies that he knows how to hurt people he cares about, he wanted to know how to live with it. So, obviously Red is hurt and he believes Dom cares about him. Certainly, their relationship seems familial - though tense at times, which is normal in a family - just ask Liz.

If Dom took in the 'Koslov Brothers' Red and Dom would have possibly developed a father/son relationship, but then of course, Red became a double agent and while Dom was able to forgive Katarina when she became a traitor - because she was his child - he couldn't forgive Red for doing the same thing after becoming a naval officer.

Viewer numbers have consistently declined over the 7 season, and it has been implied that season 8 will look into Donald Ressler's story. This seems to be moving away from the central story. With COVID-19 interrupting tv production, season 8 might not even be aired later this year. I do worry that The Blacklist might be chopped before we get to the bottom of the main mystery.
at April 25, 2020 No comments:
Email ThisBlogThis!Share to TwitterShare to FacebookShare to Pinterest

May we live in interesting times...

2020 has definitely been a red letter year so far.

In early March I had another cardiac arrest which landed me in hospital for three days this time. Silver linings? We know the Defibrater + pacemaker works. Also, we know the medication wasn't working. Clouds - well, there is the cardiac arrest in public this time, which is scary. Luckily by 'public' I mean at work, so I was sorrounded by people I know and trust. Also, the medication didn't work which means I had to change to the other medication most often used, and that medication doesn't have the added benefit of warding off migraines, so the migraines are back.

Still, I live to die another day.

This COVID-19 is a riot, isn't it? At least Australia is doing much better than other countries. The lockdown seems to flattening the curve. It will be interesting to see how the lockdown lifting will be managed. I suspect it will need to be done in ebb and flow stages, just to keep the pressure off our medical system. It's not going to just disappear, it will mutate and perhaps that will lessen the impact on humans, but viruses don't just disappear. So, it will always be a matter of managing it.

Human behaviour has been fascinating during this time. A lot of people panicked, and they were highly criticised for doing so by the general public. The so-called 'blue collar workers' were able to show their important contribution to society, the fact that without them, society simply wouldn't run. Big business was shown to be very vunerable, and not as useful to everyday survival as food and shelter and medical institutions. Yes, a lot of people have been laid off, which is also a very big problem. In the wake of all the new unemployment a lot of people who scorned people on social security have come face-to-face with just how unaffordable the level of financial support really is. In fact the Government was forced to increase the fortnightly payments so people could survive on them because there would have been hell to pay if everyone had to live like the people in our society 'living it large' on unemployment benefits.

Then there is working from home. This is where having a white collar job pays off. For those of us who do a lot of paper work, taking our work to our home office (aka my bedroom) has been relatively easy. There has had to be a crash course for many in various computer programs and web-based collaboration, which can only be a good thing. My clients, who are mostly in their 90s have learned many new skills in the past few weeks. It has been challenging but also stimulating and self-affirming.

Personally, I'm loving the lock down. I am an introvert with agoraphobia, so not only have I destressed considerably but, I'm pretty much a social hero for adhering so stringently to the lock down rules.

Oh and all the parents 'homeschooling'. I put the word homeschooling in quotation marks because it really isn't homeschooling. It's remote learning. The teachers are still doing the work, organising the curriculum, being available to students all day long. Yes, parents are having to supervise their kids, but when kids are home - certainly primary kids - they need supervision anyway. It's much more like helping kids with their homework.

Aside from the fortune of having kids in highschool and upper primary school - which makes them more independant - because of my experience with actual homeschooling, I not having to do anything new. Mind you, I have motivated kids (thank goodness Erik and Luey have finished highschool because they really were not academically inclined). A case study out of New Zealand after the Christchurch tragedy showed the kids there - who didn't go to school for months - actually didn't 'fall behind', but rather scored better on tests when they returned.

Then there are all the people who used to lament not being able to spend more times with family. They must be thrilled now!

I would love to see this become a reboot of our society and attitude, especially regarding individualism, being reassessed. One can live in hope because, as Reddington said, 'Without hope, we are hopeless.'

Let's be better than hopeless.
at April 24, 2020 No comments:
Email ThisBlogThis!Share to TwitterShare to FacebookShare to Pinterest
Newer Posts Older Posts Home
Subscribe to: Posts (Atom)