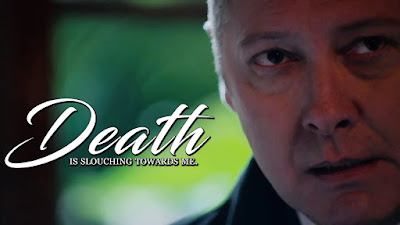 Some time ago, I wrote about Reddington having an illness (not news, I know) and that I thought it might be somehow related to Vascular Dementia because of the storyline with Samar. After episode 7.18 though, I'm convinced he actually has statin toxicity.

Here's why... Statin toxicity can lead to, amongst other things, the following;

1. Type II diabetes - remember him injecting himself back in season 5?

4. Congnitive issues, such as alzheimers - might be why he and Dembe are always playing mind-stimulating games.

Statin toxicity is adversely affected by, among other things...

1. Having untreated hypothyroidism, high blood pressure, liver disease, and kidney disease (might explain the fluctuating weight - sorry Jimmy if that's not the case, good excuse though. You're welcome).

3. Vigorous exercise (okay, not so much of late, but certainly when he was in training back in the Academy (statin intolerance can be genetic - could have been trigger early, though not as common as the damage caused by taking statins for a heart condition or high cholesterol).

4. Having type I or type II diabetes (this is a catch 22 as statin toxicity can also lead to diabetes).

5. Excessive cranberry or grapefruit juice intake (As referenced in episode 7.18)

6. Drug interactions, namely with medicines used to treat HIV, antibiotic medications, antidepressants, medications used to suppress the immune system, and medications for irregular heart rhythms (who knows what medications he took, especially after his cosmetic surgery to remove burn scars as much as possible).

7. Major trauma or surgery (lots of that in his life, all sorts, bullet wounds, dying in Marakesh, dying after a boat he was in capsised, being burned, car accidents again and again, need I go on?).

Tonight's show was portentuous to say the least.

Unfortunately, due to the who COVID-19 situation, the season was cut short by three episodes, so next week will be the last until goodness only knows when. Will we have a 25 episode season 8 to make up for it? We shall see.

at May 10, 2020
Email ThisBlogThis!Share to TwitterShare to FacebookShare to Pinterest