Let me take you on a small tour of our house...

We had a house inspection on Friday, and then the cleaners came on Saturday - I know! We had to do all the cleaning for the inspection ourselves, truly ironic when we have a fortnightly cleaning service. I thought I'd link back to a previous house tour to show how things have changed since we moved here in October 2018. It turns out I didn't do a tour back then. I can't believe it, I always do a tour - I love working on the decor of our home. In the past year, since COVID lockdown, I've felt especially lethargic and unable to keep up with projects. Usually, I think of something I want to do and then start on it immediately and with gusto. In the past year I've really struggled with this. I was going to do a really big declutter a last summer and that didn't happen, and then throughout the year I kept planning to do a comprehensive declutter over several weekends. We don't have a lot of stuff we don't use consistently, so decluttering isn't a massive project, as such. All the same, the house has been pretty bad in recent months, back enough that when I had my appendicitis attack, I refused Dave's suggestion to have a home visit from a doctor — which actually turned out to be a good call in the end.
So, after the inspection and the cleaners, I thought it might be a good idea to capture the house at its more or less best. Let's start at the front door. 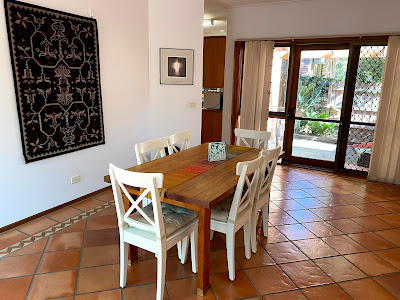 And from yet another angle to show the other court area — which is actually a paved walkway with plant beds all the way around to the front of the house. The house is very secluded. From the street it doesn't look like much, which is probably why we were the only people to arrive at the first — and only — inspection. There is a two metre high fence around the house (with one of the house wall creating the fourth side of the proper next to the driveway). There is an iron gate the size of a regular door that leads into a covered front porch where we have a garden bench. It's just lovely and inside the house, it's like a TARDIS, much bigger than you'd expect with two floor, four bedroom. Three of the bedrooms are massive, the fourth is an average single bed size.

There you go, the tour is done. I haven't taken you up to the boys' rooms and upstairs bathroom because they're not little kids anymore and don't want to share their private spaces, even when they are unusually clean and tidy.
at March 10, 2021
Email ThisBlogThis!Share to TwitterShare to FacebookShare to Pinterest